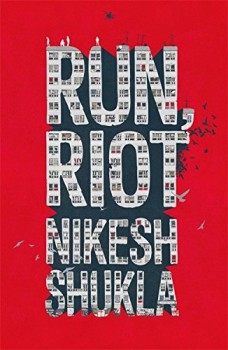 Four teens are on the run in their tower block home, determined to bring a friend’s killers to justice.

Firestone House is a run-down tower block that houses hundreds of families who have forged a sense of community there, despite their disadvantages. Seventeen-year-old Taran and her twin brother Hari didn’t want to move when their father was dying of cancer but with the rent on their former home doubling and their father unable to work, they had no choice other than to make the block their home.

Flats are being boarded up and left empty; no one wants to spend money on improvements. But NextGen, a firm of property developers, are determined to get the remaining families out so they can clinch a deal with the council that will see Firestone House pulled down and replaced by luxury apartments, a world apart from the cramped homes, broken lifts and concrete walkways that characterise the current building.

When Hari and his friend Jamal are asked by someone they know, Sim, to follow him to a nearby underpass and film what happens without getting involved, they aren’t expecting to see Sim being beaten to death by two policemen. They’re seen by the men and go on the run, trapped inside Firestone House, along with Taran and Jamal’s girlfriend Anna.

Sim’s death is connected to NextGen’s plans to exploit the site of Firestone House, with the four teenagers pitted against unscrupulous developers and corrupt coppers in a desperate race to make the truth of Sim’s death known to the world. They know the only way to do this is to upload the video to social media and spread it as far as possible, but with no credit left on their phones, they’re forced into a dangerous game of hide-and-seek in the concrete jungle they call home, with NextGen holding all the cards.

Run, Riot is a fast-paced chase thriller, with the odds heavily stacked against the four teens. The only thing in their favour is that they know Firestone House and its occupants and there are people there they can trust. But the net cast by their pursuers tightens inexorably in a story told in timed bursts, with a strong sense that Taran, Hari, Jamal and Anna are fighting a losing battle, and it’s hard to see how they can save themselves let alone get justice for Sim.

Nikesh Shukla gives the four young protagonists distinct, strong and diverse voices. All of them come over as determined, resourceful, streetwise teens, and authentic characters with bags of heart. With the ever-looming gentrification of areas that once had their own sense of community, NextGen make convincing villains in the murky world of profit at all costs, where people are just pawns, and councils would prefer to sell off buildings for development rather than provide an acceptable standard for their occupants