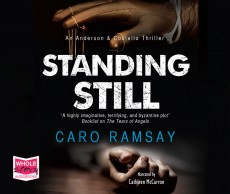 DCI Anderson and DI Costello have a murder to solve and a missing man to find.

It’s festival time in Glasgow and the city is gearing up for the annual West End Festival parade. When a young woman turns up claiming to have been abducted by aliens, the most likely culprits are drink, drugs or a combination of the two rather than little green men from a galaxy far, far away. To make matters worse, a body is found shoved inside a tea chest left out on the street.

The mother of a missing young man is frantic, thinking the body is her son’s, but harassed DCI Colin Anderson isn’t going to be rushed into a premature identification, nor is pugnacious DI Freddie Costello, not even when she gets elbowed in the nose by the grieving mother!

I’ve dipped in and out of Caro Ramsey’s Anderson and Costello series over the years, and had read the previous book in the series, so listening to the audiobook on a long drive seemed like a good plan. And it was. Standing Still is complex, grippingly and entertaining, with a side-order of deeply macabre thrown in for good measure. Even though I was reasonably up to speed with the story, there were times when I struggled to keep up as the action shifted at times from the investigation into the dead body into the inside story of confusing goings on in a nursing home, mainly seen through the eyes of one of the members of staff, a care worker who isn’t above pilfering from the people she’s looking after and dressing up in their clothes. Sarah isn’t the most likeable of characters, but she is quite compelling.

Even with plenty of backstory thrown in there were times when I struggled to make all the necessary connections, but that didn’t matter, as I was thoroughly caught up in the various strands of the investigation. I will admit there are times in the series when I’ve thought Anderson is a bit on the bland side, but he comes more to the forefront here and develops more character in Standing Still. Costello is always good value. She has all the tact and diplomacy of a brick in a sock, and I would never be surprised to find that she has one of those stuffed into a pocket somewhere.

As the story marches relentlessly on, with ever more complexity coming in from all angles, Ramsay scales new heights when it comes to weirdness with a very unsettling set piece in a mocked-up theatre. Puppets are deeply scary at the best of times, and this is exploited to the full. Warning: there are a few scenes that are definitely not for the faint-hearted!

There were several occasions when I just couldn’t see for the life of me how all the loose ends were going to be tied up, but Ramsay sews them all neatly into place and provides a satisfying ending. If you’re paying attention, you’ll probably spot some of the clues as she does play fair with her readers, but there were a few things that took me by surprise.
Cathleen McCarron’s narration provides an authentic accent without ever being too impenetrable, and she’ll now forever voice Costello in my head. She switches well between female and male characters and provides the story with a great sense of energy when needed, before slowing down to the quieter – but at times equally sinister – parts set inside the nursing home.

For anyone coming new to the series, Standing Still is an easy story to pick up. There are enough details to keep you afloat, without weighing the book down with unnecessary backstory. This is very definitely Scottish noir, with a few scenes it’ll take me a while to forget!