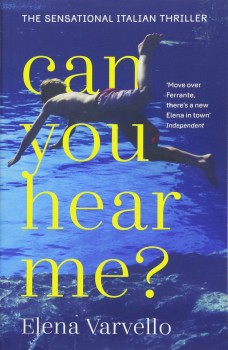 Can You Hear Me?

Elia Furenti is a teenage boy living with his parents in a remote village in Northern Italy. When a young boy is kidnapped and murdered in the village and a young girl goes missing, Elia suspects his father.

A remote village in Northern Italy provides the setting for this book. Elia Furenti is a teenager who is living at home with his parents. During the school summer holidays he meets up with another lad, Stephano, who has just returned to the village with his mother Anna.

Anna had moved away with him when he was a baby. Elia’s mother disapproves of Anna and to make things worse, Elia’s father has recently lost his job at the local factory when it shut down. He has been behaving oddly ever since. So there is a lot of stress in Elia’s life. When a young boy is kidnapped and murdered, the village is full of suspicion. Then a young girl goes missing too.

On initial reading this story could just as well be set in a remote area of the US. The feeling of remoteness, not the feeling of Italy, is the thing that really underpins the story: the infrequency of the local bus; the petrol station that sees few visitors and stocks little more than basics such as cigarettes; the dry, scruffy areas around the remote houses; the closed-down factory where bored children engage in minor vandalism during the summer holidays; the woods; the rocky river with the waterfall where the boys go to swim.

When a child is kidnapped and murdered it is easy to see how people who have little contact with the wider world might become suspicious. The atmosphere of the hot summer pervades the story, although there are also some passages set in the snow in winter or in the rain. Such passages punctuate the flow of the story. which is therefore not completely linear.

This is a story that has to be read carefully. Indeed there are numerous sudden changes of time, past and present, and of viewpoint, such as which of the characters is currently talking or thinking. These are easy to miss if reading with half an eye on something else. However when read carefully it all makes sense, and it becomes apparent that this is a very thoughtful novel which addresses ideas around the difficult issue of family relationships and mental health.

The character of Elia is drawn sympathetically. He is very much a youth going through the difficult transition into manhood. But he doesn’t yet understand adult relationships. His mother certainly loves him but she too is struggling to understand his father’s behaviour. These main characters of Elia, his parents, his friend Stephano and his mother Anna, are developed skilfully and in some depth.

It is apparent how their previous lives have affected their current attitudes and beliefs. His father’s struggle with his own mind is ever-present and sheds much light on the reality of living with demons. Other characters, although only passing through, are nevertheless real in the story: Stephano’s grandfather and the girl who is abducted are believable people.

Can You Hear Me? is a book that can draw a reader in if focussed, and indeed, it might be good to read the whole thing in one sitting.