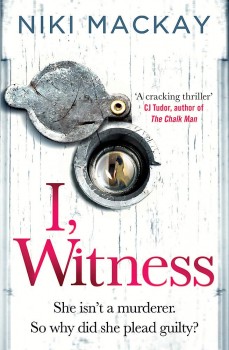 Six years ago Kate Reynolds pleaded guilty to the murder of her best friend. Now she wants to clear her name.

Madison Attallee has vitriol coursing through her veins. Once a successful DI, she is out of the force, divorced and on severely restricted access with her little girl. She doesn’t drink any more and is trying hard to make a go of being a PI. However, business is not good and she’s living on the edge.
Kate Reynolds has determination running through her veins from the moment she steps out of prison. She goes back to the one place she will not be welcome, Kingston, bent on clearing her name, determined to find out what really happened on the night her best friend was knifed to death. She doesn’t expect much from her father; he hasn’t spoken to her since she went to prison. But perhaps her brother will help.
Anthea Andrews has revenge coursing through her veins. Kate Reynolds had no right to come back and flaunt herself while her beautiful, perfect daughter lies in a cold grave.
Claudia Reynolds has little running through her veins. Married to Kate’s brother, she simply keeps her head down and the house immaculate.
Four women on a collision course. Four women whose lives will soon change. But at a heavy price.
Niki Mackay is a debut author, but she has honed her craft. She has found her voice and combined it with a sharp story. Her characters fly off the page, realistic, flawed and well-rounded. They are people we know even if we don’t know their world. They are ugly and beautiful in equal measure, and the way they cope with their lives is convincing.
There is attention to detail without swathes of description. That, and the present tense, first person point of view ensures the reader is walking next to each of the main characters. The immediacy and intensity give atmosphere and makes this a page-turner.
Dialogue is tight and each of the main characters has a distinctive voice at the start, although I felt this diminished a little part way through the story. Introspection is just as realistic and disturbing.
The pacing is excellent. It starts at a good speed and accelerates discreetly as the plot thickens. There is a complex backstory, but the author trickle-feeds the reader and it does not interfere with the forward flow. There are twists and turns even though the title and the first couple of chapters points to Kate’s innocence. And the reveal is clever.
This is a crime story, but it has depth and is as much a vivid portrayal of four women suffering at the hands of narcissistic men as a whodunit plot. At its heart is a story of abuse and mental illness, but these aspects are treated with delicacy.