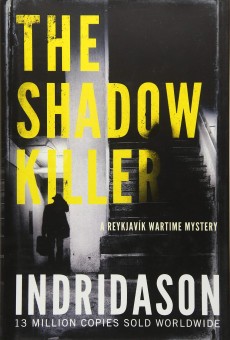 When a travelling salesman is found shot in a basement flat, the police initially suspect a member of the Allied forces as it’s 1941 and British and American soldiers are stationed in Iceland. But the investigation takes a turn into the past and uncovers evidence of dubious experiments carried out on Icelandic boys.

“On a calm spring day in 1940, the war had come knocking on Reykjavik’s door, and transformed the lives of its inhabitants.” First it brought the British Tommies, then American GIs, even though Iceland had initially joined Denmark in asserting neutrality. Many people abandoned the poverty of desolate villages and moved to Reykjavik in search of a better life, jobs and various opportunities.
The international news threatened peace, and those who were fascinated by Germany’s power kept their faith intact or realised that not all German propaganda is so great. The influx of soldiers changed the nature of the society, especially as many relationships between the invaders and women had begun and some flourished. The government tried to control the situation, especially when young girls were involved. Foreigners also knew very little of the cold island in the Atlantic, often treating locals with contempt.
In the atmosphere of distrust the military policeman Thorson joins Reykjavik’s only detective Flóvent to investigate the death of a travelling salesman, found murdered in a basement flat, killed by a bullet from Colt .45, a standard-issue service-sidearm carried by American servicemen.
Flóvent is keen to modernise the theory and practice of the detective work of the Criminal Investigation Department, after a stint with Edinburgh CID. Thorson, a so-called West Icelander born in Canada, is an interpreter posted with other Canadian volunteers. The men immediately find a respectful way to work together, despite being under political pressure to solve the case as quickly as possible to stay ahead of the US counter-intelligence, especially amid rumours of Churchill’s possible visit.
Initially the investigation focuses on a German family, the retired wheelchair-bound doctor Rudolf Lunden, and his estranged son Felix in whose flat the body was discovered. The victim seemed to be kneeling when shot in the face. With blood smeared into the shape of a Nazi swastika on his forehead this looked like a cold-blooded execution.
But it turned out that it isn’t Felix who has been murdered but one of his school friends, the very timid, poor and unhappy Eyvindur. Also a salesman, he had been recently dumped by his extremely resourceful girlfriend Vera who has swiftly started a business washing clothes for the soldiers, those of her own new British boyfriend included.
Although Rudolf refuses to speak to the police, his maid informs them of an argument with another prominent man, a director of a school that both Felix and Eyvindur attended. Very slowly an uncomfortable picture emerges of distressing experiments carried out on Icelandic boys before the war, akin to those in camps and to be potentially used for social engineering. The data was gathered by people in charge of the school and influenced by Rudolf’s brother, another doctor who believed in the genetic purity of Icelandic Vikings.
But as the bits of information from the past appear and possible motives too, the policemen struggle to find the killer, interrogating soldiers and civilians.
The Shadow Killer follows The Shadow District where Flóvent and Thorson had already met and collaborated on another mystery; however, the books can be read as standalones. Arnaldur Indriðason’s new novel, sensitively translated by Victoria Cribb, offers a unique fictionalised look into the wartime history of Iceland, populated by vivid characters who represent traditional views, modern attitudes and conflict between locals and the Allied occupied force. This is excellent pared-down storytelling.