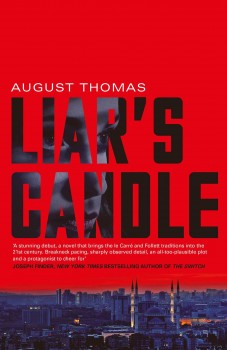 Penny Kessler becomes an international symbol when she survives a terrorist bombing, then is forced to go on the run to stay alive

Penny Kessler, a young intern at the American Embassy in Ankara, unwittingly becomes an international symbol when she survives a terrorist bombing of the ambassador’s July 4 garden party that killed hundreds, emerging from the rubble holding an American flag. After collapsing, she comes to in hospital to find for reasons she cannot understand, her bosses believe she’s a crucial witness. Everyone is desperately interested in what she knows. But she doesn’t know what it is or who she can trust.

Then she discovers that Zach, the diplomat who she has been gradually falling for, is missing – and his CIA boss is making clear her belief that he is a traitor. In a race to uncover the truth, the sharply intelligent, but hopelessly naive Penny reluctantly partners Connor, a rookie CIA man on his first overseas assignment.

They become targets for everyone from the Turkish president and his daughter to Kurdish and Islamic extremists, the US State Department, and the CIA itself as friends and foes swap places to keep their own deadly secrets. One terrifying and frankly completely improbable escape follows another as the pair are pursued across Turkey to the wild no man’s land of the Syrian border.

As the plot switches between action, jeopardy and politics, its unheroic protagonist – how nice to see an ordinary girl rather than some glamourous action heroine – is thrown into situations where she has only her wits and courage to combat ever-escalating danger.

Part of the appeal of this book is August Thomas’ understanding and obvious love for Turkey. While evoking not only the intrigue and brutality of both Kurdish and Islamic terrorism and its regime, she also manages to explain the Byzantine politics of the country in enough detail to carry the plot without ever overwhelming the reader.

Her portrayal of many elements of Turkish life and her descriptions of varying locations add an illuminating and authentic background. Even the title, part of a Turkish proverb, is a tribute to a country she obviously would like others to appreciate as much as she does.

The suspense builds and Thomas’ dynamic and powerful writing keeps the twists coming right up to the final page of what overall is an excellent debut. Penny herself has great potential as a character and she is due to return in a sequel next year.