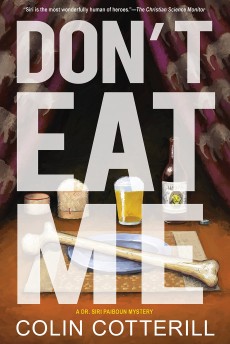 After 12 previous outings, Dr Siri Paiboun is as active as ever, and as the book begins is paddling across the Mekhong with his friend Cinilai, smuggling a fancy movie camera in from Thailand. Lack of film or the expertise to operate the camera does little to inhibit his enthusiasm, nor pressure from the Ministry of Culture that the plot provides a socialist perspective: in 1980 Laos the political realities have to be acknowledged.

Meanwhile, Siri’s friend, the newly-promoted Senior Police Inspector Phosy Vongvichai, has a puzzling case. The body of a young woman is found in the middle of town, stripped of flesh and showing on her bones what look like marks of the teeth of small rodents. An experienced keeper at the local zoo identifies the teeth to be those of civet cats, which is very strange, as civets have never been known to attack humans.

Given the very small number of vehicles being driven around Vientiane, all in government ownership, Phosy makes a connection between the deposit of the body and the movements of a limousine driven by a judge, Haeng. During progress with his attempts to clean up the judicial system, Phosy has come up against Haeng before, and is persuaded that the judge has been up to something.

His visit to the zoo has reminded Phosy that the institution had once been infamous for dealing in wild animals, orchestrated by a Frenchman who became rich, and who still lives in the country. Further investigations quickly reveal that the trade did not cease when locals were put in charge, and that there are in the country a number of operators denuding the countryside of local fauna, who are so badly handled that few survive.

Siri is visited by the spirits of such animals, who make it plain that he should be doing something to help: ‘don’t eat me’ is just one of their entreaties. So Siri and Phosy, and the rest of the ‘noodle shop justice league’ combine forces to liberate the animals caged by one of the exporters. Unfortunately, Heung turns out to be not quite as supine as he appeared, and Phosy, Siri and friends are placed in danger.

Cotterill combines serious issues with a charming and frequently amusing tale. Basic human values help to soften some of the problems arising from a failing socialist economy, and a sub-plot involving a Down’s syndrome couple, Geung and Tukta, is engaging without any false sentimentality. At the same time the indifference to animal suffering in South-East Asia is not downplayed. It would be nice to imagine that things have improved over the last 40 years, but I fear this is true only in the sense that there are so few animals left to exploit.