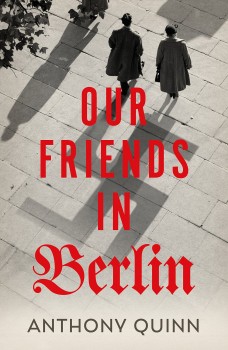 Our Friends in Berlin

1941. Jack Hoste is associated with a group of Nazi sympathisers intent on gathering secret information to help the German cause. His specific aim is to locate the most dangerous Nazi agent in Britain.

Whilst Mussolini was always regarded in Britain as faintly ridiculous – a reputation later to be confirmed by his military incompetence – Hitler was always taken seriously. Churchill was not a lone voice in warning of the danger he posed but there were those who admired, perhaps secretly, his transformation of a demoralised and poverty stricken post-war Germany into a functioning state. The extent to which this view existed is debatable, but there is no doubt that there were those who, dissatisfied with social conditions in Britain, thought that the remedy might lie with a 'strong man' in charge. The author's portrayal, therefore, of an active fifth column prepared to assist the German war effort is perfectly conceivable.

The novel begins in March 1941 at the height of the blitz on London and the devastation of the city is very well described – roads made impassable by rubble and the constant search for survivors from the nightly bombing which has to be completed before the next attack, due in only a few hours. It is made even more realistic when Jack Hoste himself is bombed out and has to look for accommodation with Traherne, an Oxford man of good family and some wealth. Hoste is associated with a group of Nazi sympathisers intent on gathering secret information to help the German cause. His specific aim is to locate the most dangerous Nazi agent in Britain.

Hoste tells Traherne about a proposed new Mosquito aircraft but reports no success in establishing the whereabouts of Marita, the German agent he is trying to locate. Traherne indicates that he might be able to help and tells him that he has located a friend of hers, Amy Strallen, who is a partner in a marriage bureau. Through her Hoste manages to locate Marita and in the process develops a somewhat tentative relationship with Amy herself.

So far the reader may be a little uncertain as to what precisely is going on because, although Hoste meets members of the group quite frequently, they appear to be making little progress in obtaining any useful information and Hoste seems more concerned with the meetings themselves rather than using them to help plan concrete action. It is not until the novel goes back in time to 1935 that things begin to fall into place and what has happened so far takes on a new meaning. There is at the time a noticeable speeding-up of the action, together with moments that are truly dramatic, leaving the reader on tenterhooks as one surprise follows another.

There is a certain inevitability about the ending, and although it is not the one the reader might have expected, it is entirely convincing. The blurb on the cover makes comparison with, among others, John le Carré – a comparison which, in the first part of the book, seems a little over-generous, but there is no doubt that as it progresses it does show some of the detailed plotting and suspense for which le Carré is famous. Another characteristic of that author's work is that the reader has always to be attentive and in this sense also the comparison is legitimate.