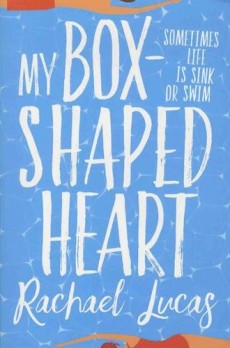 Girl meets boy, but they both have secrets, some darker than others.

Life isn’t all fun and games for 16-year-old Holly. Her mother finds it hard to part with anything and their house is already full. Bills aren’t opened. Boxes and packaging mount up. Nothing is thrown away. Holly does her best to keep her own bedroom clean and clear, but that’s all she can manage. Her mother has increasingly been unable to go out and she finds it difficult to socialise, except with occasional, trusted friends. Holly feels responsible for her mother and it’s as if their roles have been reversed, with Holly as the adult and her mother as the dependent child.

As a result, at school Holly is seen as different, She’s certainly not one of the cool kids. She tries not to let this bother her, and she does her best to pursue her love of swimming, helped by family friend Cressi, who is something of a force of nature, breezing in and talking charge in a way that contrives to help, not hinder, when Holly’s mum is laid up with a broken leg, and has to confront her own issues.

Against this backdrop, Holly meets a cute boy called Ed at the swimming pool, and a tentative friendship sparks between them, but Ed is hiding secrets of his own, and behind the perfect façade, cracks soon start to appear.

My Box-Shaped Heart takes an insightful look at the problem of hoarding intertwined with depression and a touch of mounting agoraphobia thrown into the mix to complicate matters. Rachael Lucas presents Holly’s home and her mother’s problems in a very matter of fact way, with no attempts to sentimentalise or judge. Holly’s growing friendship with Ed is endearing and well-handled, as are the later revelations about why Ed is now living alone with his mother, a woman who’s clearly at the end of her tether.

Lucas’ handling of mental health issues, coupled with a burgeoning teen romance and the issues both Holly and Ed have had to live with, elevate this to a book that’s well worth reading by teens and adults alike. It will charm, but it will also shock, and not because of the challenges Holly’s mother face, but for other darker but equally common reasons. The teens are written with a thoroughly authentic voice, and Holly’s friends are a quirky bunch, all of whom stand out in their own ways. Seeing the world through Holly’s eyes is not something I would want to have missed.