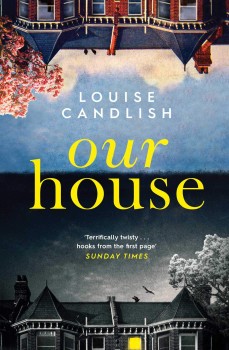 A woman arrives home to her large house in an exclusive London suburb to find a removal van at her door, and furniture being taken inside. At first, she’s sure there’s a simple explanation – they must have the wrong address. But when she goes inside, she’s shocked to find that all the family’s belongings have gone, and the house has been redecorated. And even worse, the strangers moving into her house insist that they’re the new owners.

When I heard that the basic premise behind Our House was property fraud, I leaped on the book with anticipation. I was a property lawyer for over 25 years, dealing with high-volume transactions and during that time, I pretty much saw it all when it came to frauds and attempted frauds so I was hoping this would be right up my street. It’s not often people write books about conveyancing, and when legal matters do crop up, a lack of basic understanding of the law is usually pretty obvious. I was hoping for something different here.

The story starts from the date and time-stamped perspective of Fiona Lawson – Fi – the woman who comes home to find strangers in her house and jumps right into the action with her being told in no uncertain terms by the strangers – Lucy and David Vaughan – that there’s been no mistake. The house is now theirs.

It’s a strong premise and was well-handled. But from my perspective, things went downhill almost as quickly when the suspense bubble is pricked and it’s clear that her husband is behind the fraud and that he’s done a runner to Geneva. I saw the traditional domestic noir vista opening up before me with one spouse decidedly dodgy, the other one wronged and the traditional 2.4 darling brats in tow, and that’s pretty much how the rest of the book panned out.

Louise Candlish opts to tell the story using two different stylistic devices, the first, under the guise of a series of podcasts from a website called The Victim, tells Fi’s story complete with a Greek tragedy chorus line of social media commenters under the hashtag #VictimFi which seems to have the sole purpose of summarising the emotions the reader is meant to be feeling. The dodgy husband – Bram – tells his side of things in the form of a Word document that he has emailed from his eventual hideaway.

The disintegration of their relationship culminates in an uneasy truce and a trendy co-parenting solution where the kids stay put in the house and Fi and Bram each spend time with them there whilst living elsewhere in a shared flat. The stress was on the welfare of the kids, but unfortunately, they’re no more than cardboard cut-outs in the background throughout the story. The emphasis throughout was on #VictimFi and #DesperateDodgyBram and, in the curse of domestic noir, I found it hard to empathise with or care about either of them, particularly as for a lot of the time, it seems that Fi cares more about the house than she does about her kids, and Bram doesn’t seem to care about anyone other than himself.

There’s a strong plotline behind the book, but for me, the inability to feel anything but mild irritation about either character put a huge barrier between me and the book. The property fraud angle is certainly plausible and mirrors some I did come across in my career. With a lackadaisical conveyancer it could work, but in my experience that’s where the realism comes to an end, as the minute a major fraud like this comes to light, the police are very definitely interested rather than dismissive, and so is the Land Registry. The latter pay out millions every year in cases where fraud has led to a change in the register, and any halfway decent solicitor would have taken matters in hand for Fi, but then that wouldn’t have played so well to the #VictimFi angle, and as usual, legal reality isn’t allowed to get in the way of storytelling.

If you’re inclined to have a go at property fraud yourself, I wouldn’t advise using Our House as a self-help manual! Getting the whole scheme to work required almost as many conveniences as the Glastonbury Festival …