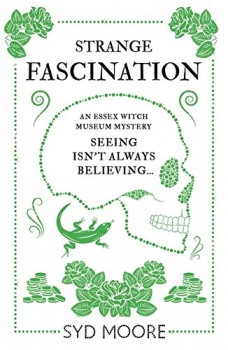 A stone with an old legend is about to cause major problems for the locals in the village of Adders Fork.

The Blackly Be is a boulder by the pub in Adders Fork village. It is the last resting place of witch Black Anne and disturbing it is sure to bring down a rain of supernatural disturbances upon the village. Of course, the stone is disturbed and in the ensuing panic the villagers turn to the Essex Witch Museum for answers, but Rosie Strange, its still reluctant owner, isn't sure she can help when the past interferes with the present and local history becomes personal history for Rosie.

This is the third book in the Rosie Strange series of supernatural murder mysteries, set around the fictional Essex Witch Museum. The usual format is there. There is a crime with supernatural elements, some of which will have more mundane explanations; there is the usual will-they-won't-they romantic dance between Rosie and Sam, the museum manager; and there's a few more details about the mysterious disappearance of Rosie's clairvoyant aunt in the 1940s.

The big difference here is that most of the book is spent researching a crime that took place several hundred years ago and it takes a long time before there is a contemporary crime to investigate.

In this book we spend time getting to know the locals of Adders Fork. They don't exactly fall into stereotypes, the one pitchfork-carrying local does it to annoy people, according to his daughter. We meet the local lords of the manor and other residents, all with their own secrets, some darker than others. Rosie is fun to spend time with, though. She's an Essex girl to the end of her manicured finger-nails, but never lets that get in the way of her keen investigative nose, even if she is concerned about exactly how exclusive her new trainers are.

There's also some evidence that her aunt's clairvoyant powers haven't completely left the family. Rosie is still undecided about how much effort she wants to put into the museum she has inherited in the same way as she is unsure about how much she feels for its manager, the handsome Sam. I do wish she'd make up her mind. It's certainly clear to even the most casual reader which way the narrative is going to go.

It was fun to spend time in this little corner of Essex. There was some real threat and excitement as well as a few spooky chills. And proof, as if it needed repeating, that you shouldn't mess with an Essex girl or her family.