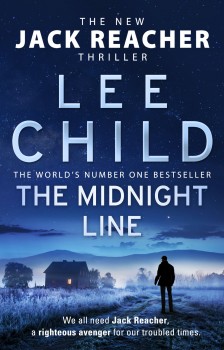 Jack Reacher finds a small ring in a pawn shop that must have belonged to a marine. As an ex-military man himself, he sets off to track the owner down.

Jack Reacher is an ex-military policeman and has never settled down since leaving the services, but lives his life by moving around.  On one bus journey, at a comfort stop, he comes across a small ring engraved with the words ‘West Point’.  Having attended West Point Military Academy himself, Reacher knows that no one who had been through that military academy would willingly pawn their ring.  So he sets out to find the owner in case they are in some kind of trouble.

Needless to say there is a chain of people who have handled the ring before it arrived in the pawn shop.  No one is willing to give up any information without a fight, so each person in turn has to be persuaded to give the name of the one before as Reacher works his way back towards its original owner.

In each fight the tactics are explained in detail almost as a mathematical conversation.  At each stage, Reacher analyses the behaviour of his foes and predicts their next move, planning each of his own moves ahead, weighing up the number of opponents, their size, their demeanour, their positions, and their likely tactics.  And inevitably he is successful. It is quite fascinating to read such an analysis.

Apart from these fights, this is a relatively gentle book with not a lot happening for much of the time, which effectively sets up the atmosphere for the end of the search, in the state of Wyoming.  The descriptions of the huge, wide-open countryside build up a wonderful picture of this empty state: the remote houses, miles apart from each other; each house with its own private track from the road; each house with its verandas and often empty out-buildings; the occasional inhabitants who hardly know each other; the small town selling the basic essentials; and the dust where any car that is moving can be seen on the horizon by the dust cloud it makes as it moves along.  This faintly depressing picture makes for a very atmospheric setting in which Reacher has to hunt for a missing person.

This is a thoughtful book with much less action than might be anticipated. The pace is slow with Reacher really trying to do what he thinks is right in looking out for a fellow soldier.  The writing is, as always with this series, crisp, clear, and straightforward. The characters are constructed carefully, often by building up their surroundings first so that each main character emerges already half-formed from their context.

The only one that seems to lack something is the police detective who appears occasionally throughout the story.  The only apparent reason for her inclusion might be as a contrast to Reacher whose methods are direct and unconventional. He gets things done.  Although working more or less within the law, he isn’t governed by traditional ways of doing things.  Also he knows people with clout who respect him and can help.  He is a real character with depth.

Fans of the series should enjoy seeing yet another side of the life of Jack Reacher and for new readers it could be a gentle introduction.