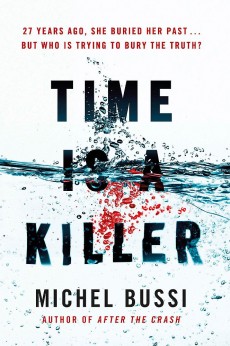 Time is a Killer

Twenty-seven years after the accident that killed her parents and brother, Clotilde is back on the island of Corsica where they died. But her past is about to rise and threaten her and her family.

In the summer of 1989, Clotilde is 15, feisty and complex; a loner who watches her older brother and his friends making the most of their carefree Corsican holiday from the sidelines. She senses tension building between her beloved father and the mother she can barely stand. And she explains it all to her fictitious future reader in her diary. She even bleeds her heart onto the pages when she falls in love with an unreachable man, ten years her senior. Until the accident.
2016. Clotilde has returned to the island with her husband and moody teenage daughter. She wants to lay her ghosts to rest. She wants to close the aching gap that has grown between her and her daughter. But her husband’s and daughter’s indifference to her past threaten to split them all apart –even more so when she receives a letter. From her mother.
I fell in love with Michel Bussi’s word wizardry when I read Black Water Lilies, then had the opportunity to review Don’t Let Go. Although the latter annoyed me with its plethora of footnotes, Bussi hooked me with his multi-layered, sensory driven, deeply complex plots and flawed characters.
And he is one of the few translated French authors who allay my fears of breaching the wall of the cultural divide. Time is a Killer is yet more proof that certain books do travel well, despite its Latinate words. Quite simply, the plot is so good, the characters are so thoroughly developed, the backdrop is so vivid that the reader accepts the word choice.
Clotilde as a teenager comes alive in the form of a secret diary, which is believable of the musings of a girl in the 1980s with a body complex. Although her writing is on the mature side for a girl of her age and could be unconvincing, this is justified and forgivable. She is flawed, angsty and instantly recognisable. She hates, she loves, she dreams, she fears. As an adult her dreams are broken. She hurts, and like many mothers of teenage girls, she feels estranged from her daughter, and increasingly from her husband. Valentine, her daughter, is a daddy’s girl. Franck, her husband, is impatient with Clotilde’s need to exorcise her past. It is as if the two are ganging up.
The plot twists and turns. Though I pride myself on normally working out whodunit, I still had an unhealthy list of suspects as I arrived shockingly close to the end. Someone is trying to make Clotilde believe her mother is not dead. Someone wants the death of her family to remain an accident. And someone is going to extraordinary lengths to do so. But other people from Clotilde’s past are pointing fingers, in many directions, which all adds to the tension and confusion.
The ending is a little cheesy. The reveal is somewhat protracted. And there is one convenient body, which annoyed me. But these hiccups did not spoil an intensely satisfying read. I emerged from Time is a Killer with the sense of having truly visited Corsica and having shadowed real people. This is a beautifully crafted, atmospheric story and extremely well translated; one which is a page-turner and heightens the emotions and it creates a liaison that I didn’t want to end.