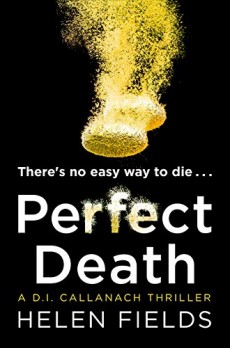 A naked girl is found dead on Arthur’s Seat in Edinburgh. There is no sign of foul play but it is midwinter, there is no sign of a struggle, she died of hypothermia and there appears to be no reason why the circumstances of her death should have arisen.

DI Luc Callanach and his dear friend Ava Turner, newly promoted to DCI and his boss, lead the investigation in this third book of the series by Helen Fields.

Further deaths occur, and a young man, with changing names engages himself with a series of potential victims. His real identity becomes clear but is hard to see how any police officer will actually find the perpetrator.

There is a parallel story regarding police corruption when Begbie, the erstwhile beloved DCI, is found dead, apparently by suicide, in his car in an isolated spot. Ava is left with a moral dilemma in following up what she uncovers, conflicted by her desire to protect the reputation of the man she admired and the need to discover the circumstances which led to his death.

This novel is every bit as gripping as the previous two. The deaths and the violence are less shocking and graphic but nonetheless their description is exceptionally realistic and disturbing. More attention is given in this book to the relationship between Luc and Ava, particularly the problems and pressure cauased by their attraction and the gap caused by Ava’s promotion.

Also more of Luc’s back story in France is explored, including his damaged relationship with his mother. All of the main series protagonists are engaging, interesting and attractive. Their interrelationships are as important as their interaction in solving the crimes.

If you decide to read these books I recommend that you start with the first one in the series and progress through, in order to get the maximum interaction with the protagonists, although the books can equally well be read as standalones.