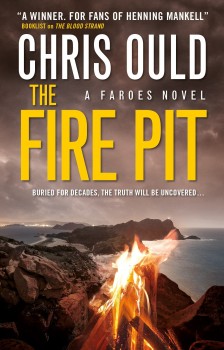 On the Faroe Islands local detective Hjalti Hentze investigates the suicide of an old drunk. In Denmark the British DI Jan Reyna searches for answers to his past. Both men realise that both stories might be connected.

Faroese detective Hjalti Hentze is called to deal with the unfriendly alcoholic Boas Justesen’s apparent suicide but this task changes from fairly routine to mysterious. A skeleton of a young woman is discovered on a windswept hillside, and Hentze suspects that it is a body of a Norwegian woman who had been reported missing 40 years earlier. Astrid Hege Dam and her young daughter Else vanished from a hippy colony in the hamlet of Múli, run by a Danish man Rasmus Matzen, and on land owned by Justen, a regular visitor to the commune.
Nobody cried after the old drunk’s death but many remembered his involvement with the Danish hippies who had wanted to establish themselves far away from the constraints of formal society. But harsh living conditions, inhospitable land and weather, and suspicious locals made the survival of the colony impossible in the long term. On top of that the idealistic notions seemed to hide some repulsive behaviour. Hentze decides to dig into the past, even though his superiors aren’t too keen on this course of action.
Away from the islands in the mid Atlantic, British DI Jan Reyna conducts a private search into his mother’s suicide in 1976 after Lydia Tove Reyna had abandoned her Faroese life and husband, and moved to Copenhagen. Four-year-old Jan had been profoundly affected by her death, though he has no recollection of that time, and he was brought up in the UK by loving relatives.
Following his recent short stay in the UK for a disciplinary hearing (mentioned in previous books) he is disillusioned with his job and office politics, and so takes a drastic decision to plunge headfirst into the painful memories of others. As he’s searching through forgotten names, faces and places in Denmark, he discovers his own history, as well as the devastating effects of the abuse of young women spanning four decades, and also murder.
Various strands are considered and pulled together until realisation hits that Reyna’s personal enquiries and Hentze’s investigation plus curiosity and sense of justice are very tightly intertwined, and so many people, for example Justesen’s cousin who came to the funeral but spent his adult life in America, are still linked to the events at the Múli colony.
Chris Ould has full control over the tight, interesting plot and main characters who have developed throughout the entire trilogy. Reyna and Hentze work brilliantly as partners and as individuals, each using their own skills and professional judgment to search for the truth, and very tactfully and respectfully bouncing ideas off each other.
Although Reyna’s life is overshadowed by personal tragedy and the black dog, he doesn’t dwell on it. On the other hand, Hetze’s down-to-earth stoicism and determination make a welcoming change from a truly depressive cop. Another great character is Tove, a young Danish student, a Saga Norén-type of The Bridge fame. She initially helps Jan with translating documents and research but here her role is substantial, and her inquisitive mind and lack of social skills are both a blessing and a curse.
Of course, each book can be read as a standalone, dealing with an individual investigation. However, it would be much more satisfying and thought-provoking to read them together and in order, starting with The Blood Strand and then The Killing Bay. I have an impression that Ould has thoroughly researched the geography and history of the Islands, but his vast knowledge and deep passion are pared down to use only the vital snippets of information to move the story along. The locations, both Danish and Faroese, are vivid and tangible, bringing real authenticity to the narration and the fascinating background. And the finale is superb.