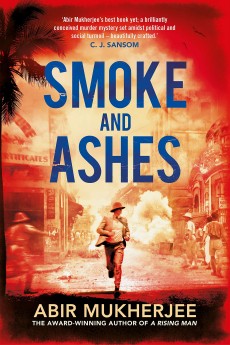 Drug addict war veteran Captain Sam Wyndham, now a senior officer in the British-India police, is surprised in an opium den by a vice squad raid. During his escape he finds a mutilated body and then stumbles into a plot to disrupt a royal visit.

With the often sly humour which has characterised his brilliant Sam Wyndham trilogy – and helped win him the 2017 CWA Historical Dagger – Scottish-born, London-based Abir Mukherjee dedicates the series finale to his mother, in the hope she will now forgive him for failing to become a doctor!

She certainly ought to! This, hopefully not, final story is a serious contender for the best ‘faction’ murder/mystery/reality adventure since Freddie Forsyth’s Day Of The Jackal.

With allowances for some time elision, every major incident and turning point in this beautifully crafted and gripping story of Calcutta in 1921 as Mahatma Gandhi’s non-violent protest movement began to loosen the grip of the Raj is based on fact.

So too are many of the major players. The brilliant, but ailing, Lincoln’s Inn barrister Chitta Ranjan Das was indeed Gandhi’s chief lieutenant in Bengal and Subhash Bose, who later became an Indian nationalist hero, played his part as Das’ own number two.

The vital role played by Basanti, Das’ wife, who, at a crucial period in Anglo-Indian history, virtually single-handedly re-energised the peaceful non-cooperation movement at perhaps its lowest ebb, is also faithfully recorded.

Somehow Mukherjee manages the delicate balancing act of presenting the nationalist case and the pathetic British response, which included sending the Prince of Wales, later Edward VIII, to bolster the fading image of the King-Emperor on a royal tour, with real balance.

This is a brilliantly conceived murder mystery set amidst political and social turmoil. And in Sam Wyndham, the opium-addicted World War I veteran, hooked on drugs after morphine treatment for his injuries, he has the ideal narrator.

The cynical former intelligence officer is beautifully balanced out by his Oxbridge-educated Bengali sergeant, ‘Surrender-not’ Banerjee, torn by his own nationalist feelings and his perceived duty to the British-dominated police service which has seen him become an outcast to his own family.

Sam is surprised in an opium den by a vice squad raid. During his escape he finds a mutilated body. When there is no report of the death – and others which follow – he clashes with military intelligence and stumbles into a horrendous plot to disrupt the royal visit with an attack which could kill thousands.

If Mukherjee’s clearly drawn characters appear at first sight a little unnuanced to literary purists, the Wyndham series combines a terrific sense of place, with its developing and sympathetic characters and a fascinating backdrop. His greatest skill is controlling the pace, building drama, or taking time to work on a character or historical element. The humour is layered throughout, but never undermines the story.

Superb evocation of the place and times, a flamboyant evocation of steamy, bustling Calcutta, contrasted with Wyndham’s struggle with an addiction competing with the need to find a criminal to prevent an horrendous crime, make this a mesmerising read.

Mukherjee’s combination of historical truth and a cracking and totally believable plot, set in a critical period of Anglo-Indian history, will have the reader hooked from the start by what is an absolute page-turner. There won’t be a better read for those who like their history spiced with adventure.