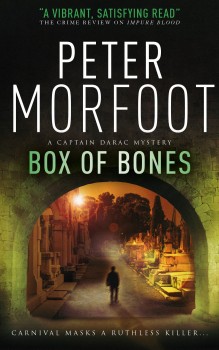 A man suffers a fatal fall at the Nice carnival, the first in a series of suspicious deaths. Captain Paul Darac of the Brigade Criminelle investigates.

Peter Morfoot has spent 30 years exploring the life, art and restaurant tables of the French Riviera. The result is a series of ‘franglais’ crime novels which perfectly capture life in the millionaire’s playground while offering a very different – and very French – approach to the business of detection and life in general.

In this clever and entertaining third story featuring Captain Paul Darac of the Brigade Criminelle and his engaging and distinctive team of officers, Darac is a witness to the death of a man in a fatal fall amid the colour and pageantry of the Nice carnival. With the boulevards alive with dancers, jugglers and musicians, a series of suspicious deaths quickly follows. Darac becomes convinced the answer lies in the mystery still surrounding a daring bank robbery, supposedly resolved years ago.

Reopening that case, also awakens powerful enemies, and soon the safety of his friends, his colleagues and even his own family is at stake.

Morfoot builds his story in the French style, with care, amounting at times to near digression, but establishing his characters firmly, from the talented detective and jazz guitarist manque Darac, to the disparate members of his squad including a second in command whose policing ability is matched by that of finding the most outlandish sweeties available in a country which takes its confectionary seriously!

The day after the apparent accident at the carnival, Darac and his family are attending a commemoration ceremony at his mother’s grave when they appear to be the targets of an assassination attempt. But the detective quickly realises that the shooter was aiming at another man standing at a nearby memorial – and that he had seen the same man pursuing the carnival fatality through the crowds.

Gradually he forms a link to a spectacular bank robbery that took place years before. Add to this the all-too typical story of a corrupt property developer planning a move into politics, his seriously dysfunctional and homicidal daughter, the obligatory French mixture of family relationships, infidelity and corruption and this boils nicely into an interesting story which will compel the reader to keep turning the pages.

Not only are the good guys and girls well drawn, but as the story develops, so too are the villains and the plot, filled with enough twists and turns for a corkscrew, is intriguing while never losing touch with either reality or humanity.