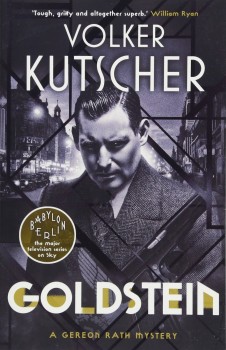 When the Berlin police receive a warning from the FBI that hit man Abraham Goldstein is making a visit, the brass are somewhat alarmed. Gereon Rath is assigned to keep an eye on the visitor, but without adequate resources for round-the-clock surveillance Goldstein goes missing. When key men in Berlin’s gangs, the ringvereign, start to die it is suspected that Goldstein is the man responsible.

Meanwhile, Rath’s girlfriend Charly, a lawyer in training, is caught up in another matter. Alex and Benny are two young rough sleepers who have found a way to survive by hiding in department stores and emerging at night to steal watches and jewellery. At the KaDeWe store, however, the police are ready and waiting. Alex escapes, but Benny falls to his death from a fourth floor parapet after one of the police stamps on his hand.

Alex is picked up on a minor matter but refuses to talk, and escapes from the room where she is being interviewed by Charly. Charly is called upon to do some sleuthing to locate Alex and redeem her reputation, but even after her work bears fruit Alex is still reluctant to trust the police or anyone associated with them.

The difficulties of Rath and Charly in managing their relationship run through the book. Rath has rings in his pocket and waiting only for a suitable opportunity to pop the question, but an appropriate time never seems to arrive. Charly likes him better than he realises, but at the same time is wary of his tendency to dictate. As it emerges, she is right in her suspicions that he is not willing to share: Rath is being blackmailed by Marlow, head of the Berolina gang, and is obliged to pass on information gained through his police work.

The picture one gains of the police department suggests that behind a correct and authoritarian hierarchy there is something going on. Although in 1931 the Nazis have not yet taken power, Nazi gangs are an increasingly violent force on the street, with regular brawls against communist factions. It might be natural to suspect that these groups have already subverted the operation of the justice system. In fact the truth lies in another direction, with the shape not entirely clear until the final pages.

A series of novels featuring Gereon Rath beginning with Babylon Berlin was a hit in Germany, and a television version was aired on Sky last year. In English translation the book reads without problems, but I didn’t find either the two protagonists or their colleagues sufficiently engrossing to sustain my interest for more than 500 pages. When the setting is Germany in 1931 on the threshold of an apocalyptic decade, I somehow expected something portentous of things to come.