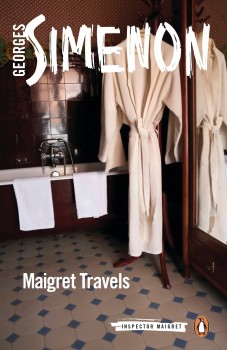 Maigret investigates the death of a very wealthy Englishman.

The Countess Palmieri, staying at the prestigious George V hotel in Paris, makes a call to the hotel switchboard in the middle of the night, asking for help and saying: “I don't want to die.” Help arrives but a more serious situation soon presents itself.

That situation involves the death of a very wealthy Englishman by the name of Colonel Ward and as Maigret begins to investigate it seems to him that he is in a sense out of his depth. It soon becomes obvious that the Colonel is a man of extreme wealth and that he and the countess who sought help in the middle of the night are having an affair. Before long Maigret encounters another Englishman, a Mr John T Arnold, who was very close to the Colonel and is staying at a nearby hotel that again caters exclusively for the very rich.

When the Countess's first husband, Count Palmieri, and her second, Joseph Van Meulen, appear on the scene Maigret begins to realise that he is involved with the set best described as 'the idle rich'. These are not people who have made fortunes for themselves but people who have always had fortunes, who were born to wealth, have never worked and who have no concept of what that would imply.

Maigret is aware that in the midst of an investigation he is often regarded as an important man or, at least, one who, as a policemen of senior rank, has to be taken seriously. He has the impression, however, when interviewing these people that they do not take take him seriously and that at times their attitude towards him verges almost on the contemptuous.

Nevertheless, the interrogation of these acquaintances of Colonel Ward has to be undertaken and Maigret finds himself flying to Nice, Lausanne and Monte Carlo in pursuit of the privileged. Whilst Van Meulen in particular is very forthcoming with his replies, Maigret realises that the solution of the crime will involve a detailed analysis of the comings and goings at the Hotel George V, as far as these can be ascertained from the testimony of the night staff. It becomes obvious to Maigret, however, that this in itself will not provide all the answers required and that the investigation will involve the making of some assumptions.

As a result the novel is somewhat different from what we would normally expect. Maigret virtually dispenses with his other inspectors and spends a considerable amount of time deep in thought as, slowly wandering around the scene of the crime, he tries to put himself in the shoes of the murderer. It is clear that he has somebody in mind but the reader is given no hint and it is only when he is finally convinced of the truth of his conclusion that he calls for any help.

The streets of Paris seem much quieter than usual as he goes his own way, quietly contemplating what he knows has happened and making it clear in his own mind. It lacks something of the excitement of the chase to which we are normally accustomed, but we have a certain sympathy for the introspective Maigret, the one who is not entirely sure of his place when dealing with the very rich. He feels out of place – a situation which all of us can recognise from past experience.