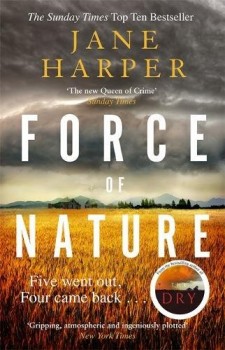 Five women trek into the bush on a company awayday. Only four of them make it out.

Five women trek into the Australian bush on that most hated of all corporate activities, an office team-building exercise. Like all offices, BaileyTennants has its fair share of simmering tensions, all of which the women drag around with them like a pile of bricks in their backpacks. But usually on staff awaydays, everyone comes out the other end – possibly hating each other more than they did before – but it’s customary for everyone to survive. Here, that’s not necessarily the case.

Five women trekked into the bush, but only four walked out. Alice Russell is missing, and no one knows what has happened to her, and if they do, they have no intention of telling the truth.

Federal Police Agent Aaron Falk – the hero of Harper’s debut novel The Dry – wants to know what has happened to the missing woman. Alice Russell is an important player in a case he’s working on, one that threatens to take down BaileyTennants, and if Alice’s attempted whistleblowing has been discovered, it’s in a lot of interests for her to stay lost – preferably dead.

The big mystery about Force of Nature is not what happened to Alice Russell but is actually how the hell any of the women survived more than 24 hours together without mass murder taking place. They’re not exactly the most likeable bunch. Sisters Breanna and Bethany seem to be at each other’s throats most of the time. Lauren is obsessed by her daughter. Jill Bailey, the chair of BaileyTennants, has the power to sack any of them. Alice is sharp and secretive.

Force of Nature alternates between the gradually unfolding story of how Alice came to go missing and the search for her, with Falk and his colleague Carmen trying to extract the truth from four women who seem equally determined to keep it buried. The story was rather a slow burn for me. I was hampered by not caring very much for any of the women in general and certainly not caring much about Alice Russell in particular. It’s obvious very early on that she has a lot of secrets to keep, but I found it hard to make a connection with any of the group and even harder to distinguish one from the other until almost halfway through the book.

I liked both Falk and Carmen, and it was them who kept me going at various points when I’d put the book down – like an over-heavy backpack – and didn’t have much inclination to slog on any further. But I’m glad I did. The more tensions mounted, the easier it became to work out who was who and I started to become intrigued by what had happened to Alice – although I never quite lost the feeling that if I’d been alone with her with a large rock to hand, the story would have ended a lot quicker.

Force of Nature is a good study in how a group reacts under pressure. Small things become magnified and when food is scarce, tensions soon run high. Possession of an illicit mobile threatens to tear any remaining social cohesion apart and eventually the simmering resentment bursts out.

Jane Harper weaves multiple strands into the narrative, and the scenes at an abandoned shack in the bush are particularly creepy, with a suggested link to a serial killer adding an additional layer of threat. Stick with it. When the story finally hits its stride there’s plenty to like, and if you didn’t hate the thought of company team-building days at the start, you’ll certainly be determined to avoid them by the end!