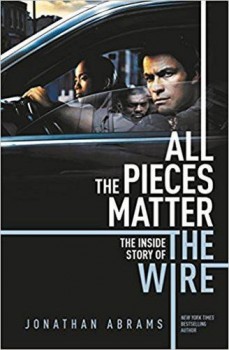 All the Pieces Matter

Actors, writers, directors and others involved with The Wire contribute to an oral history of the influential TV drama.

I can’t fault this quote from actor Robert Wisdom, who played Bunny Colvin: “There are two kinds of people in the world. People who have seen The Wire and people who haven’t seen The Wire.” If you’re one of the poor, misguided souls in the latter category, then move along, there’s nothing to see here. If you’re one of the former, this oral history will remind you just how stunning and influential the TV drama was.

At the time it was the best show that no one watched, and was constantly snubbed by Emmy judges. Showrunner David Simon, a former newspaper reporter on the Baltimore Sun, had his work cut out persuading the bosses at TV channel HBO to re-commission the show at the end of each series. The drama, which in many ways resembled a complex novel, demanded much from its audience as well as from the actors.

Series one focused on how police could crack down on the Baltimore drugs trade – and the wire tap is where the series got its title. The subsequent four series covered – broadly – the docks and the loss of jobs for life, politics, education and the media. Simon admits that they could easily have devoted two more series to police corruption and immigration.

Now, ten years on from the end of the show, journalist Jonathan Abrams has put together an oral history of the show through interviews with actors, writers, members of the production team and bosses from HBO. All the big names contribute, including Simon, co-creator Ed Burns and actors Idris Elba, Dominic West, Wendell Pierce, Wood Harris, Clarke Peters and Michael K Williams.

Reading the book (which I did in two sittings) is like being a giant fly on the wall. Juicy snippets emerge between the more serious chat. The iconic battered orange couch seen on the street in series one was thrown out, and a new one had to be acquired at great expense - apparently crushed orange velvet wasn’t a thing in the US, and the fabric had to be flown in from the UK. And I must admit I’d forgotten Ziggy Sobotka’s large willy in series two – there’s an amusing account of the prosthetic appendage being constructed!

Ray Winstone was the first target to play maverick cop Jimmy McNulty, although Simon wasn’t entirely convinced that he’d manage the American accent. Winstone disappeared back to the UK after 9/11 and was never seen again by the team. In the end the role went to another Brit, Dominic West, who angsted a lot over nailing the accent. West, clearly as much a livewire off-stage as he was on camera, apparently didn’t get on with the ultra-serious Lance Reddick, who played Lt Cedric Daniels. And the memorable wake scene in a bar with the raucous rendition of The Pogues’ Body of An American was a tribute to much-loved producer Bob Colesberry, who died during filming.

One of the most striking inclusions in the book is the photograph of the African-American cast members, staged at the behest of actors Robert Wisdom and Andre Royo, who played drug addict Bubbles. They wanted that breadth and depth of talent recorded for posterity. Ironically, one of the thoroughly depressing theories put forward for the show’s initial lack of audience engagement was that it was seen as too black.

What’s clear from the book is just how influential the show was and how it impacted on actors’ future careers. It made the likes of West, Elba and Williams immensely bankable. Sonja Sohn, who played lesbian cop Kima Greggs, set up ReWired for Change, an organisation devoted to helping at-risk Baltimore youths. And the show gave Felicia ‘Snoop’ Pearson, who’d never acted before, a chance to leave a life of crime behind her.

I was always greatly irritated by writer George Pelecanos slagging viewers off for using TV subtitles – it took my British ears half a dozen episodes to acclimatise to the accents. You’d have thought he’d have wanted viewers to stay with the show rather than abandoning ship when they couldn’t follow what was being said. So I sniggered at a comment from actor Seth Gilliam, who played Sgt Ellis Carver. Gilliam, who’s American, said: “I had to watch the show with the subtitles on, even though I had the script, to understand what was happening on it.”

If you haven’t seen the show, watch it – with subtitles if necessary. If you’re already a convert to what is one of the greatest dramas of all time, you’ll need no excuse to settle down for a re-watch.