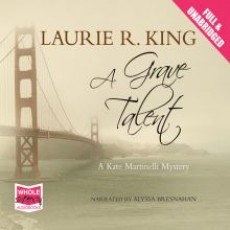 Newly-promoted homicide cop Kate Martinelli has to earn the trust of a new partner as they investigate the murder of young girls in a remote country area.

Back in the dim and distant 1990s, when computers were to be pointed and laughed at by cynical cops, and mobile phones were the size of house bricks, Laurie R King wrote A Grave Talent, introducing San Francisco cop Kate Martinelli. I loved the book to bits and included it in my Master's dissertation on feminist crime fiction. Twenty one years later, I listened to it on audiobook, realised how much of it I'd forgotten, but enjoyed it all over again.

I rarely re-read books – too many books, so little time – but I'm glad I took the time to revisit this one. All I could remember about it was the little plot twist involving Kate's private life. I was sorry when King moved away from the series about eight years ago, seemingly to concentrate on her Sherlock Holmes and Mary Russell books, which have never much interested me.

A Grave Talent hasn't dated in the least. Kate is newly promoted to homicide and has to negotiate an initially awkward relationship with the gruff and experienced Alonzo Hawkin. But they gel as a working partnership when they investigate the murders of young girls, whose bodies are dumped outside the city in the remote commune-like Tyler's Row area, which is presided over by a millionaire, who has more than a touch of the medieval squire about him.  As they interview residents in the area, they encounter a brilliant but reclusive famous artist with a past she's trying to forget.

In many ways, Kate is as enigmatic as artist Vaun Adams. But the case forces her to reveal aspects of her own life. This isn't a crash-bang-wallop all-action book. When the violence explodes, it's sudden and shocking. But King's talent is her ability to get inside the female characters' heads and also to show how painstaking police work will often crack a case. And even though there are talky sections towards the end, they never become dull, as King has woven a painful but believable tale of how people's lives can easily be wrecked by one action, and how easy it is for someone's mental state to crumble. Her descriptive powers meant I was convinced I knew Vaun's paintings.

It's well worth tracking down the book if you can – it appears to be out of print but available from various second-hand sources. Better still, buy the excellent audiobook, which benefits from a spell-binding narration from Alyssa Bresnahan, who pitches male and female voices with aplomb, and paces a story, which in the wrong hands could have dragged, to perfection.