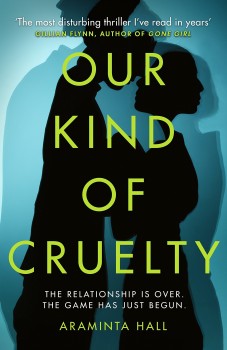 Our Kind of Cruelty

Mike and Verity have a long-term sexually charged relationship that sometimes involves playing a game called Crave. This game seems to continue after they part, a murder takes place and their lives are catapulted onto a trajectory of destruction.

The world is seen through the eyes of Mike, a high-earning, good-looking man in his prime living in London. He has beaten all the odds considering he had a tragic childhood with an alcoholic mother where he had to live in squalor before he was taken into the care system.

Mike’s inner world is on display, his thoughts, plots and plans, as he works towards winning his ex-girlfriend Verity back. They had a long-term sexually charged relationship but split up after he admitted making a crucial mistake one evening whilst away on business.

Verity is now with her wealthy new partner Angus and soon to be married. The question constantly arises of whether she really is going to marry him or whether this is another more intricate and drawn-out version of ‘Crave’, the game she and Mike used to play.

The way this story is written maintains a state of suspense throughout, and it’s not possible to be 100 per cent sure if Mike is reading all the signs from Verity wrong or if he just knows her better than we do as readers. The intensity of his obsession for her makes an enthralling read and at times I found myself rooting for him.

This psychological thriller is superbly written and takes us on a journey into the despair and tragedy of obsessive love. The tragedy unfolds in its entirety at the end and left me gasping at the outcome. I almost couldn’t believe what I was reading and yet couldn’t help but admire how the author has meticulously weaved in a series of events that has led to the conclusion.

Our Kind of Cruelty resists the temptation to put any of the characters in the good or bad box, and cleverly shows the many facets of a complex human character, evoking sympathy, fear and anger all whilst shining a bright unforgiving light on how society views female sexuality.