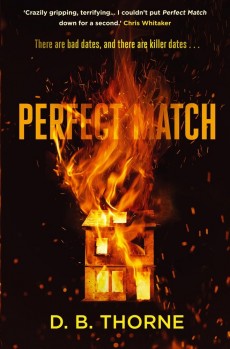 Soloman’s sister is in a coma, and he knows this was no accident. But the police don’t believe him. Or don’t want to.

Solomon is kind, highly intelligent, rich and single. He’s the ultimate eligible bachelor. But he confines himself to the inside of his beautiful apartment in London and has few friends. And nobody but his brother Luke and his sister Tiffany have seen him for years. Nobody would want to see his disfigured face.
Now Solomon must leave his sanctuary. Tiffany is in hospital in a coma. Solomon tries to get the police involved. He is convinced her injuries are no accident, certain she was attacked after hooking up with someone she met via an online dating app. The police don’t want to know. But then they wouldn’t, because Tiffany is just a stripper. Worse still, they are more concerned about Luke’s whereabouts; he is a person of interest, a bad guy with a record.
Undeterred, Solomon start his own investigation, using his few online friends and his intelligence. Soon he realises that Tiffany is not the predator’s first victim. Neither will she be his last.
Perfect Match uses the third person past tense, and although most of the chapters belong to Solomon, the main character, there are chapters and scenes devoted to other players, including Luke, Fox (the main police investigator) and a growing number of victims.
While the dialogue is tight, sharp and convincing, the introspections and descriptions, along with the backstory are lengthy, rambling sentences. At times, they are repetitive and almost incoherent. For readers who tend to only breathe in at the end of a sentence, I would suggest an oxygen tank by their chair. Yet, this could just be the author’s style, because he does squeeze short sentences in-between the long ones, which balances the paragraph structure. And when he wants to increase the tension, he does so in the time-honoured way; by shortening the sentences dramatically and keeping introspection to a minimum.
Equally, the author lulls the reader into a pattern; he establishes the point of view he is using at the start of the chapter. But every so often, he will leap to another point of view part way through a chapter or even just for a paragraph, which is baffling. The author also has an irritating habit of losing chronology.
Although the lesser characters are undeveloped, the other more important characters are interesting and far from stereotyped. The author manages to make them three-dimensional by balancing understated description with dialogue and behaviour. Solomon is mesmerising and engaging. It is as easy to like him as it is to dislike Fox. However, his behaviour rattled my suspension of belief; even though he mused with a degree of angst about going out into the big wide world, he got there physically with too much ease.
Moreover, for someone who had not opened his door to anyone in years, it took little time for him to start letting the world and his wife into his sanctuary. That said, Solomon is one of the few protagonists I have encountered recently who I would like to get to know more. And I felt cheated at the end, because although there is potential for a second book, I didn’t get a sense of ‘watch out for the next instalment.’
I thoroughly enjoyed the predator’s luring technique. It is more interesting than most and it is refreshing too that the predator doesn’t kill all his victims. That Solomon used his cronies for brain-storming to solve the riddle made it more believable and fun. The ending was thankfully free from the prolonged reveal.
The sense of time comes primarily from the ever-present technology. There is little sense of place – it could have been Anyville. But that is incidental and doesn’t affect the story in a negative way.
I liked this book, despite my misgivings about the quality of writing. The language is accessible, the plot, though far from unique, is interesting, and the protagonist took me on a journey with his disfigured face. I read it in one sitting, really wanting to know what would happen on each turn of the page.