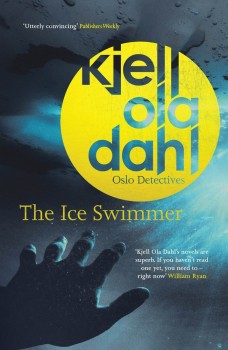 When a man’s body is discovered in the freeing waters of Oslo harbour, city detectives Gunnarstanda and Stigersand face a very complicated case, leading them into the murky world of political secrets.

The Ice Swimmer brings back Oslo detective Gunnarstanda and team, though Frank Frølich, suspended from duty following events in the previous book Faithless, remains mostly in the background. This, plus a complicated case, puts detective Lena Stigersand in the spotlight and finally allows her to play a bigger role.

As Christmas approaches and the festive atmosphere in the city goes up, the temperatures go down well below sub-zero. One bitterly cold morning the body of a man is lifted from the freezing waters of Oslo Harbour. Lena is in charge of the investigation into what initially looks like an unfortunate accident. Yet from the start something feels not right about circumstances surrounding the death of a civil servant Sveinung Adeler, an ambitious and very fit man in total control of his own personal life as the inspection of his nondescript apartment has proved.

Steffen Gjerstad, an investigative journalist, approaches Lena and shares some information about Adeler’s professional interests related to finances of the Norwegian Oil Fund. It also appears that the victim had a meeting with Aud Helen Vestgård, an attractive female politician, the night before which might have some political consequences. The tip-off implies that they were alone at the dinner. The MP often appears on TV and doesn’t shy from controversial topics. Dinner with a younger civil servant from the finance department could have been completely ordinary.

Soon after that revelation the police realise that the apparent suicide of Nina, a homeless woman, in front of a metro train is connected to the frozen victim. She was a witness to the murder of Adeler and hence had to be eliminated. But the insufficient available evidence points in different directions.

Higher powers demand that Lena and Gunnarstanda deal with the case without making any political waves or upsetting Norway’s security services. Money, authority and influence are without doubt the mechanism that stop proper procedures. But Gunnarstranda’s famous gut feeling, though dismissed by his boss, and Lena’s tenacity are a potent mix, pushing towards the surprising shocking finale.

Lena faces a lot of obstruction at work, for example from a new colleague, and is uninterested in following procedures, such as talking to Vestgård about a threatening letter she’s received. On top of that she’s facing a cancer scare, an untrustworthy boyfriend and a dangerous stalker. She longs for love and at the same time she fears it. She’s misquoted in the press, and cannot find a person who  is leaking internal information. Amid all these difficulties she wants to do normal everyday things, manages to remember her deceased father, tries to choose the best Christmas gift for her mother, and takes her skis and escapes to the snowy tracks.

Gunnarstanda does everything he can to support her and to find the killer, descending into the depths of the underground train lines, noticing the invisible signs of a struggle and using his own experience to fight the battles worth fighting. And then he shares a recipe for a magnificent fish dish. There are no potatoes – but the ode to a halibut’s head soup is just beautiful.

Kjell Ola Dahl’s fine style and intricate plotting are superb. He keeps firm hold of the story, never letting go of the tension but sometimes he also enjoys wandering into a quiet contemplative moment. On purpose, of course.

Don Bartlett’s translation, as powerful as Dahl’s writing, makes The Ice Swimmer a real treat for all those who want intrigue, a dark and complex story, and convincing characters presented in excellent prose.