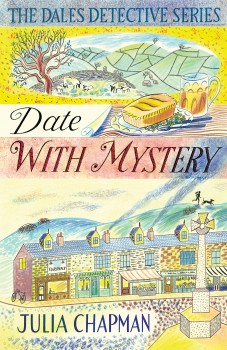 Private eye Samson O’Brien and dating agency boss Delilah Metcalfe are reunited in what seems a simple case which uncovers secrets some would far rather stayed buried.

The Yorkshire Dales in a cold, snowy February, with their winding roads overshadowed by rugged peaks and their small communities of insular, suspicious and gossipy inhabitants is hardly the setting for the traditional cosy detective novel.

It is to Julia Chapman’s credit as a writer that she manages to imbue this third in her Dales Detective series with sufficient warmth and humanity to offset its grim, but strangely beautiful, background and to show the warm-hearted and generous side of a people known for their aggressive stubbornness or ‘brussen’.

The harsh life of the hill farmers and the townsfolk of Bruncliffe – two mills, one quarry, all derelict – is portrayed with affection for the area and its people and is riddled with dry Yorkshire humour as Chapman, who also writes as Julia Stagg in her fine Fogas Chronicles of the French Pyrenees, gets to grips with the part of the Pennine Way where she now lives.

Her main protagonists are Samson O’Brien, a National Crime Agency undercover cop sent on indefinite leave for his own safety, who has launched a local PI business to make ends meet while rebuilding his relationship with his reformed alcoholic father, and the woman from whom he rents office space, Delilah Metcalfe. She’s the fiery boss of a struggling dating business, getting over an impulsive – and bad – marriage, constantly worried about cash flow and whether her former husband will seize her faithful companion, the Weimaraner Tolpuddle, for whom he has retained Kennel Club registration.

A local solicitor hires Samson to find a death certificate for a young woman who died more than 20 years before. The lawyer insists that Delilah, with her wealth of local contacts and knowledge, works alongside him. Delilah is keen to help, partly to take her mind off the looming custody battle for her precious dog and the threat of the bank foreclosing on her struggling business.

Inquiries quickly reveal there is absolutely no official record of the girl’s death and they find themselves embroiled in a decades-old mystery. But as they struggle towards the truth it becomes clear they are exposing secrets someone would prefer remained buried.

This is a classic whodunit, but it is Chapman’s cast and their relationships with each other which lifts this story out of the ordinary. Many of the characters, as you would expect in  a small town, reappear from previous stories and even the most unlikely, the malodourous, uncouth and none-too-honest hill farmer Clive Knowles who is desperate to find a wife, are all very real people, talking and behaving exactly as you would expect them to.

More is revealed of the secret Samson, the former black sheep of Bruncliffe, has been keeping. His leave was prompted by fears for his life, but the gang after him have also turned their attention to a smear campaign accusing him of corruption and the theft and resale of drugs seized as evidence. This has been so successful that he now faces formal suspension, a possible trial and prison – where he can be more easily dealt with!

Inevitably Samson and Delilah have become attracted to each other as they have been called on to solve two previous nasty cases in the area. Inevitably both have tried to ignore it – a situation Chapman handles with both confidence and empathy. The final chapter of the book lays the groundwork for a further adventure – certain to involve some danger for Samson.

As village murder mysteries go, this clever, witty and realistic series is strongly recommended to anyone who wants a genuine, but not too cosy, cosy, with a strong cast, good plotting and a superbly depicted background. Chapman’s research is first class, but she does need a little more work on her firearms knowledge, as I suspect the next episode is more than likely to involve their use!