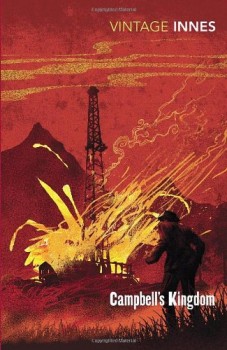 A man who has been told he has only a short time to live receives news that he has been left property in Canada.  He refuses to sell it, as his lawyer advises, and decides to emigrate with a view to spending his last days on the property.

Hammond Innes was a prolific writer for almost 60 years. His first novel, Doppelganger, was written when he was only 24 and his last when he was in his eighties. This particular thriller has a somewhat old-fashioned feel to it. It is not simply that Bruce Wetheral has taken part in World War II – a setting which continues to occur in thrillers written even today – but that he seems to be very much a part of that time.

Compared with thrillers written today, there is a sort of innocence in Campbell’s Kingdom. Canada was largely undeveloped and the Rocky Mountain region in particular was still very much as nature had designed it. However, all that was to change as the search for oil became more and more important, particularly in the western world. The question of the effect of oil exploration on the environment doesn’t arise and if oil cannot be found in that piece of land named after Wetheral’s grandfather, then it will be flooded as part of the complex for a new dam. There was still nothing to fear about tomorrow’s world.

Bruce Wetheral is a man whose life has two major drawbacks. The first is that his job as an insurance clerk in the City is hardly fulfilling. The second – and more important one – is that he has been diagnosed as suffering from terminal cancer. When he receives a visit from a solicitor who informs him that his grandfather, Stuart Campbell, has bequeathed to him an oil exploration company, together with property in the Rocky Mountains, he sees a chance for a little excitement before he dies.

Being of a somewhat independent turn of mind, he almost instantly rejects the offer that the solicitor says has been made for it. His grandfather, who had been absolutely convinced that oil was to be found in the Rocky Mountains, had died before he was able to prove his theory. Wetheral decides to emigrate and to take up what he sees as a challenge, as he thinks his grandfather would have wished.

His illness means that the journey is very difficult for him and when he finally arrives at the ghost town that is the settlement nearest to Campbell’s Kingdom, and sees the task he has set himself he is exhausted and very close to despair. However, he has not come all the way from London to give up at the first sign of difficulty and resolves to try his luck with the company. It soon becomes clear, however, that almost all the local inhabitants regard his late grandfather as a swindler who persuaded many of them to invest in what he knew was an enterprise that was bound to fail.

From this point on the book becomes what used to be known as ‘a rollicking good yarn.’ Wetheral manages to find a few friends and together they set about gaining access to the property, which is situated high in the mountains. There are, however, people who have other interests in the area – interests which do not include allowing oil to be found – and the scene is set for confrontation. The odds appear to be stacked against the newcomers, particularly since the road leading to Campbell’s Kingdom is controlled by these hostile interests. It is obvious that if Wetheral is to fulfil his ambition to finish his grandfather’s work he will need all his determination and ingenuity. It seems to him that every time he overcomes one obstacle he immediately finds another in his way, but he presses on, sometimes against the advice of his friends,

The way in which the stand-off is resolved is unexpected and surprising and leads to a highly exciting climax. There is, however, a noticeable absence of character in the novel. The villains are precisely that and, although there is more life in those who make up Wetheral's friends, they are never wholly convincing. In particular, the love interest – a stroking of hair and an occasional kiss – is not something that engages attention and, along with other developments, makes for a somewhat sentimental ending.

For those newer readers wondering whether they might enjoy this novel, a comparison could legitimately be made with, for example, Buchan’s The Thirty-Nine Steps or the ‘entertainments’ of Graham Greene. For those people who enjoy thrillers there is plenty to like here, even if it is not the kind of novel that would be written today.