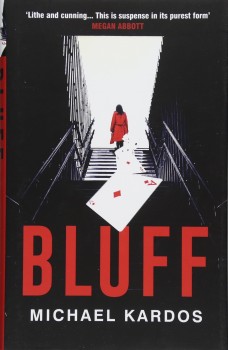 Young magician Natalie Webb is down on her luck and persuaded to use her skills in a bent poker game. However, things don’t go according to plan.

At the age of 27, Natalie Webb’s early promise as a magician has faded. While her skills with cards are as impressive as ever, difficulty in moderating her temper has blighted her career. She scrapes a living out of her tiny New Jersey apartment, looking for a new idea to resurrect her reputation and fortune.

After an incident which exposes her to a risk of being sued, she meets a lawyer who suggests her skills might come in useful at a poker game. Natalie rejects the idea but spies the possibility of a magazine article about the skills of a card cheat from the perspective of a magician. The lawyer puts her in touch with someone he knows, and she arranges to sit in on a poker game where the cheat’s skills will be on display.

Although the game plays out in an unexpected way, Natalie does find Ellen, whose skills are nothing short of breath-taking. Natalie presses Ellen to teach her a few moves, and Ellen agrees, but in turn seeks Natalie’s help with a big poker game where she plans to clean up. Natalie’s natural resistance to illegality is undermined by the fact that the key target is a rich man who ruined her father.

Natalie views the approach of the big game with ambivalence and trepidation. She is still worried about crossing the line into criminal activity and knows that her sleight of hand will be tested more than ever before. Her worry increases when Ellen damages a finger, so that Natalie is the one who will have to execute a crooked deal, calling for perfection in card-handling. Her concerns turn out to be fully justified, although not in the way she had anticipated.

Card manipulation, both legal and illegal, has a glamour attached to it, although I doubt whether those who spend hours rehearsing magic tricks for legitimate entertainment appreciate being linked with those whose skills are directed to the swindling of others. One can think of plenty of instances where the lines are blurred, but I was a little uncomfortable with the implication that Natalie’s moral slide was other than reprehensible.

Alternatively, it is possible the author is explaining Natalie’s changed perspective by her experiences, acting on someone who had no strong moral code in the first place. Either way, I have some reservations about the plot in the latter part of the book, notwithstanding that it twists in a totally surprising way, making for a really gripping last few chapters. If you need encouragement to avoid card games with people you don’t know, read this book.