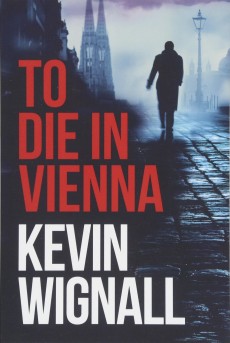 To Die in Vienna

Ex-secret service operative Freddie Makin has been given the task of watching a computer science teacher and submitting daily reports. Then an attempt is made on Freddie’s life.

Freddie Makin, a man with a past in the secret services, has been given the task of watching Jiang Cheng, a teacher of computer sciences, and submitting daily reports Freddie doesn't know what is happening and, that being the case, has no idea what to do when he has to kill a man who has been sent to kill him.

From everything that he has seen, Jiang Cheng seems to be no threat to anybody but Freddie feels that his spying on him has to be connected with the attempt on his life – a feeling that becomes a certainty when his boss is killed and Cheng disappears..

Much of the interest in the first part of the book derives from Freddie's attempts to find a reason for what is going on whilst, at the same time, taking steps to protect himself against the unknown enemy. He has the advantage of having previously worked for a secret organisation connected with the CIA and, though now back in civilian life, is thus able to use the skills he has acquired.

Less welcome consequences of that life are his feelings of guilt and the nightmares associated with the deaths of three colleagues in an operation of which he had been in charge. He does not know why the man who killed them allowed him to live but he cannot rid himself of the feeling that he was in some way to blame.

In spite of the violent deaths at the beginning, this novel by no means provides a thrill a minute. In fact, it proceeds fairly quietly as Freddie sets about establishing what secret is being so jealously guarded and who is responsible. There is a lot of coming and going and a considerable amount of convincing tradecraft as Freddie seeks to safeguard himself and to locate those responsible for the murders..

He has one very good lead in the person of Marina Mikhailova, a university lecturer with whom Cheng used to play a weekly game of chess in a nearby cafe. She provides him with useful information that goes some way to explaining what is going on, but he is by no means certain that he can trust her. Another source of information is Jun, Cheng's girlfriend. She tells him that Cheng had developed a secret computer programme that might be applied to nuclear warfare.

The latter part of the book contains much more in the way of action. Freddie finds out who is responsible for the murders and realises that the person has a team to carry them out.  He feels that the best way to proceed is to incapacitate or permanently remove the members of the team until it no longer functions efficiently and is less of a threat to him personally.  The way in which he goes about doing this is very neatly contrived and is perfectly consistent with all we have learned about his background.

This is an enjoyable novel that provides an interesting read. The only mild complaint is that there is, perhaps, too much emphasis on Freddie's PTSD symptoms before they are fully explained, but once they are, the guilt feelings and the nightmares fall into place.