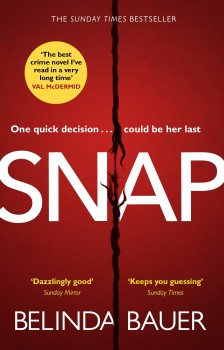 DCI John Marvel wants to investigate murders not burglaries, so when a cold case gets on his radar, he’s prepared to break a few rules in pursuit of the truth.

When their car breaks down on the hard shoulder of the motorway, 11-year-old Jack and his two sisters, Joy aged nine and two-year-old Merry, still in nappies, are left behind while their mother goes for help. At first, they do what they’ve been told, and stay in the increasingly hot car, waiting.

It’s obvious from the start that there isn’t going to be a good outcome from the search for the missing woman, as good outcomes are rare in any of Belinda Bauer’s dark visions of west country life. The children lose their mother, then a few years later their father walks out, unable to cope with the crushing weight of his wife’s murder and the demands of bringing up three children on his own, leaving Jack to care for his sisters.

Jack succeeds in presenting an outward vision of normality by keeping windows clean and the grass neatly mown, but inside the house’s bland façade, tottering piles of newspapers are everywhere, collected obsessively by Joy and built into huge piles that threaten to crush the children. Despite the squalor of their daily lives, Jack will do anything to ensure he and his sisters stay out of the hands of social services.

DCI John Marvel isn’t enjoying his exile from London. He wants to be dealing with murders rather than being side-lined into the hunt for a serial burglar dubbed Goldilocks, a reference to the thief’s habit of sleeping in the beds and eating the victim’s food, before stealing their valuables and disappearing, leaving behind no clues.

Bauer brings her characters as vividly to life as ever. There’s the stuffy copper who always likes to be perfectly turned out and who looks down on his overweight, untidy boss. Then there’s Jack’s fence, Smooth Louis Bridge, who shaves and plucks most of his hair, pushes his baby around in a pram, and comes up trumps when needed, delivering an entertaining lecture on custom-made knives to an audience of stunned police officers who end up wondering why the hell they haven’t just arrested him.

Marvel and Jack form an unlikely alliance in the search for a murderer. Marvel has no objection to tearing up the rule book and lighting a fag from the resulting blaze, and the only rules Jack follows are his own. They make a highly entertaining partnership amidst a painful story of how three children’s lives are broken seemingly beyond repair.

Bauer is skilled at creating characters whose lives – and deaths – matter. It’s never possible to get too complacent when reading one of her books as tragedy stalks the hills and towns of the Taunton area hand in hand with dark humour. No tourist board is every going to use one of her dark narratives as an advert for a holiday in the west country, but her books rise head and shoulders about the average police procedurals and it was good to meet DCI John Marvel again. Snap has earned its place on the Man Booker longlist.