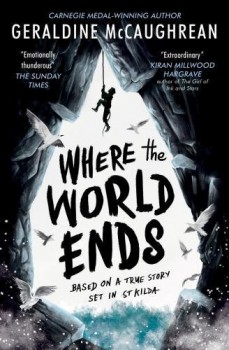 Where the World Ends

Every year a small group of men and boys visit a wind-swept sea stac to harvest the nesting sea birds, but this year the boat fails to return for them.

In 1727, a small group of men and boys from the islands of St Kilda in the North Atlantic are taken to a tall, uninhabited sea stac to hunt the numerous birds who roost there over summer. There they take refuge in caves nestling amid the formidable cliffs that they must climb every day in search of their quarry. It’s a rite of passage for the boys, but it’s all too easy for tragedy to strike during the few weeks they spend marooned on the unforgiving rock.

Quill’s mother sends him off with a new pair of socks and a puffin to eat. Quill is a good climber and quickly proves his worth by killing the lookout bird that keeps watch over the gannet colony to warn the other birds of danger. This earns him the coveted title of King Gannet for the duration of the trip. When he’s not killing birds, Quill spends much of his time on Warrior Stac daydreaming about Murdina Galloway who came to the islands to help at the Minister’s school.

The weeks pass by quickly, with the men and boys gathering a large quantity of birds, drying them inside towers of stone where the ever-present winds cure and preserve the flesh ready to be taken back home with them. When the weeks stretch out longer than usual, Quill and the others start to wonder why the boat hasn’t arrived to take them home. Wondering soon turns to fear, as the group remain stranded on the inhospitable Warrior Stac with winter fast approaching …

Where the World Ends is based on a true story, and that makes the story of Quill and his friends even more poignant, bringing home the harsh reality of life – and death – among one of the most isolated communities in the British Isles. The people of St Kilda lived a precarious life mostly cut off from any larger communities, dependant on items brought over by the occasional boat. They paid rent every year to their landlord and most of the inhabitants had never left the islands in their life. It was a harsh existence for little reward

The hardship suffered by the fowlers as they wait for rescue, not knowing why they’ve been abandoned, is brought vividly and terrifyingly to life by Geraldine McCaughrean’s lyrical, haunting language. The cadence and rhythm of island speech lends a strangeness to the narrative without ever becoming impenetrable or distancing. She effortlessly conjures up the reality of everyday life on the sea stac where dead seabirds are used in place of candles, threaded with a wick so they burn right down to their feet. Nothing is wasted. Birds’ stomachs are used to store valuable oil, and this is used as an all-purpose cure for anything from burns to coughs and bruises.

I found it impossible to put the book down until I knew whether the story of Quill and his fellow fowlers ended in happiness or heartbreak. I resisted the almost overwhelming temptation to turn quickly to the final pages to find out. This is a story to be savoured, taking in the vivid descriptions and skilful character-building that makes the book a worthy winner of the CILIP Carnegie Medal for 2018.