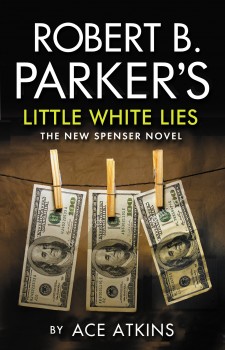 Spenser is on the trail of a conman who doesn’t want to be found.

Boston PI Spenser takes on a client who’s seeing his psychiatrist girlfriend Susan Silverman professionally. Connie Kelly wants help tracking down the conman who swindled her out of a fortune. She knows she’s not likely to get the money back, but she wants to confront him and to do that, she needs Spenser’s investigative skills.

Spenser soon discovers that everything about M Brooks Welles is phoney. He claims to be a former Navy SEAL but despite a lot of appearances on TV, his story doesn’t stack up and there’s no evidence to back up any of his claims of having done extensive black ops work. His college record is equally false. When Spenser finally catches up with him, Welles claims that for a man with his background, going off the grid isn’t hard, and he even manages to convince Connie Kelly to trust him again.

Welles is tied up with some very dodgy characters involved in the gun trade, and it’s not long before a bunch of heavies have Spenser in their sights. But with Hawk as back-up, Spenser isn’t an easy man to take down.

Ace Atkins has stepped with consummate ease into some very big shoes with his continuation of Robert B Parker’s iconic Spenser series. The dialogue is as sharp and snappy as ever. Spenser and his various relationships are depicted with the same spare but expressive brushstrokes and, even more importantly, the series still feels utterly authentic.

In his later books, Parker had stripped the stories down to little more than a skeleton of their former selves, not much beyond dialogue to sustain interest. The use of ‘I said’, ‘he said’ was becoming repetitive and had threatened to turn the books into caricatures of themselves, but Atkins has reversed that trend and wound the style back to somewhere in the middle of the series and put flesh back on the bones.

If you know and love Spenser and Hawk from the original series, you have nothing to worry about here. Atkins is a very worthy successor to Parker and the books remain as fresh as they ever were, with smart dialogue, good plot and immaculately described action. He even manages to make Susan Silverman marginally less irritating!