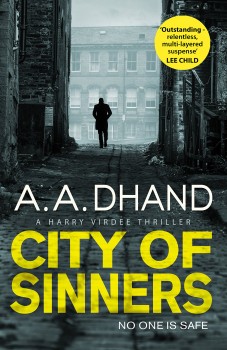 A young Asian woman is found murdered in a Bradford bookshop. But as DCI Harry Virdee investigates, the killer is leaving bizarre messages for him and making it clear that it’s personal.

It’s taken long enough, but at last more BAME writers are moving into the crime fiction genre and shining an uncompromising light on race and cultural issues in the UK.

City of Sinners, the third in AA Dhand’s Bradford series, puts the n into noir. I can imagine it as a TV drama, with harshly-lit interiors and bleak winter scenes outside. You won’t be particularly set on visiting the city once you’ve finished the book – I suspect Dhand won’t be getting the freedom of Bradford just yet!

DCI Harry Virdee gets results. But he has baggage. And he breaks (bends, if you’re being charitable) the rules.  And whatever case he’s involved in always seems to be personal. This time, a killer is taunting Harry. The body of a young Asian woman is found strung up in a bookshop with a very gruesome added element. As the murder count climbs, Harry has to work out what links the victims and why the murderer is so focused on leaving him messages and repeating a mantra about sinners.

If you like the noir end of things and serial killer mysteries, then City of Sinners has an unusual plot and motivation for the murderer that you probably won’t guess. But I couldn’t help thinking that the crime element is often the less interesting angle in the book. And there’s probably one plot twist too far at the end. What makes the book so readable, though, is Dhand’s portrayal of the city’s first, second and third generation Asian families. And he’s particularly focused on what a character calls brown on brown racism.

Harry and his wife Saima are in a mixed marriage – he’s a Sikh and she’s Muslim. Both are ostracised from their families, and both faced violence when they made their decision. Their marriage is solid, and they have a three-year-old son, Aaron. But when Harry’s father suffers a heart attack at the start of the book and Saima, a nurse, saves his life, his mother Jyoti is determined to rebuild the relationship and to see her grandchild grow up.

There’s also the presence of Harry’s brother Ronnie, who is backed up by some scary ex-military men in his bid to control the drug trade in the area. Naturally there’s plenty of angst between the estranged brothers as their paths inevitably cross.

A couple of odd expressions knocked me off my stride. The police-speak often sounds American, with references to police badges, autopsies and homicides. I remember wondering in the first book why Harry was flashing his badge at people instead of showing them a warrant card. And he wouldn’t have been looking for a form tutor in a university – you find them in schools! It’s a personal tutor he was in search of.

Occasionally the family angst does threaten to unbalance the plot, but otherwise City of Sinners is a hard-edged and unflinching read. This series has TV adaptation written all over it. And I think it would transfer well to the small screen, although I bet Virdee gets a more rounded sidekick written in by scriptwriters, given his work colleagues in the book are all pretty anonymous. But I’m already giving due thought to who could play Harry, Saima and Ronnie!