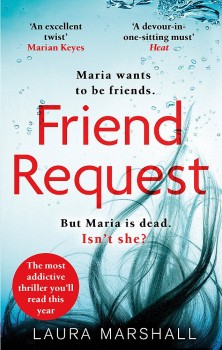 Louise has been haunted by the fear and shame of her school days, hiding a secret that only four people in the world share. One day she receives a friend request on Facebook from Maria Weston, a girl she was once friends with. But Maria died 25 years ago.

Two years after her husband Sam left her for a younger woman, Louise is just getting to grips with life as a single mother, sharing her small London flat with her four-year-old son, Henry, and her interior design business. She lives vicariously through Facebook, connecting with old friends online rather than in person; commenting and liking, clicking rather than ever really communicating. Her only friend is her son’s babysitter, Polly, although even around her, Louise keeps her real self hidden.

Then one evening she receives a Facebook request from Maria Weston, a girl Louise went to school. But Maria died the night of the leaver’s party, 25 years ago. Despite her reservations, Louise clicks accept, and finds herself being forced to face the ghosts of her past, the train wreck of her present and the possibilities for her future, however short that might turn out to be.

Every horror fan on the planet has seen at once one movie with this exact same plot, possibly with the exact same title. But despite having seen more than one film where a dead girl stalks her old school bullies online, this novel kept me intrigued from start to finish. And whereas most of the blonde bimbos in the movies react by hiding under their duvet with their old school sweetheart, Louise faces the unseen, insidious threat with more humanity and realism.

The characters here are well written and the plot well conceived. Louise reconnects with the people she went to school with, and finds all of them as conflicted and affected by the past as she is. The back and forth of the narrative between the present and the past joins the two timelines seamlessly, letting the reader develop a connection with Louise, sympathy for Maria, and a deep dislike for the kids who made their lives a misery.

The secret Louise has kept hidden for all of her adult life, the one which has torn apart her relationships and basically left her lonely and apart from others, is made to feel as huge in the reader’s mind as it is in hers. It’s left to us to give that secret power, to decide for ourselves how bad what Louise did really was, and while we’re still deciding, we’re right there with her, sharing her guilt and her determination to get to the truth.

My only complaint is that what should have been a surprise at the end of the story is spoilt by one of the comments pasted on the front cover of the book - announcing there’s a twist means you’re constantly looking for it, which subtracts from the eventual shock when you get there because it is one of the possibilities any well-worn thriller fan will already have worked out.

Despite that, I devoured this book in one afternoon. It’s an entertaining, well-written book that outwits all its Hollywood movie namesakes.