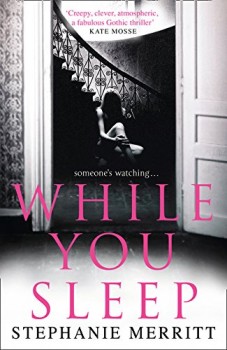 McBride House should be Zoe’s restful sanctuary, but there is so much evil within its walls that she may regret closing her eyes.

Zoe is risking her marriage, perhaps even the custody of her son. But she needs to get away from her domineering husband, and to have time to think in solitude. Leaving America for the seclusion of a remote Scottish island is the perfect answer. Or so she thinks. Zoe has optimistically rented the beautiful but isolated McBride House, owned by the local publican.
As she encounters some of the residents, it seems her presence polarises opinion. Some of the locals welcome her with open arms, others snarl with antipathy.  However, most have something to say about McBride House with its dark secrets and tragic past. But soon Zoe will find out first-hand that its secrets are far more than local legend; they are very much alive and evil.
Give me a terrifying ghost story and I am in my element. The same applies to crime, psychological or straight thrillers, horrors, magic realism and even tastefully written erotica. However, when the author squeezes most of the above categories into one story, I'm not sure that it reinvents the thriller genre as the blurb announces, as much as it simply defies categorisation.
The story is written in the third person past tense and follows Zoe from the start to the end. And despite the distanced point of view, the reader gets to know this feisty but slightly unreliable and flawed main character. She is, as are all the characters, stereotyped. Charles is the archetypal tweed-swathed academic. Edward is the young, naive teacher, a little shy and sporting the obligatory floppy fringe. Then on the antagonists’ team, there is Dougie, the sleazy mechanic and his sidekick, Annag, the young barmaid with an attitude that makes her about as welcoming as a rash. The overt stereotyping renders all the characters rather flat and unmemorable.
The plot is familiar yet far-fetched. It is fast-paced, but even taking that into consideration, some of the relationships blossom at an unlikely superhuman speed. And because of the mix of genres, some elements of the story are unconvincingly explained away, resulting in blurred lines. At one point, I actually muttered, “Why are you trying to please every possible reader?”
The erotica jars. It is almost incongruous in nature, and although it does play a part in driving the plot forward, it reads as if appealing to the Fifty Shades fan club. The erotica is particularly sleazy when it segues into the abuse of an underage girl.
There is a brave attempt at creating atmosphere. The reader is under no illusion that they’re following Zoe around a Scottish island (unnamed): think crashing waves, barren moorland and thunderstorms. And the author certainly portrays the darkness inside the McBride house. Unfortunately, the descriptions are awash with clichés, and the author has missed an opportunity for uniqueness. The thrill factor is there, but not enough to sustain a rampant heart-rate from start to finish.

Despite its flaws, While You Sleep is entertaining. It has plenty of gasp-worthy twists. It is an easy read, and in a few places, the author managed to raise my pulse and check behind half-closed doors. There’s one genre too many in this book, but it’s an enjoyable novel, particularly on a dark and stormy night!