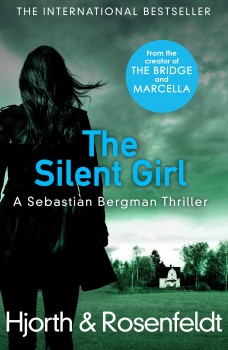 by Michael Hjorth and Hans Rosenfeldt (translated by Marlaine Delargy)

Leading criminal profiler Sebastian Bergman again joins Riksmord, the national police homicide unit based in Stockholm, to search for a killer who has gunned down a whole family in a small, quiet Swedish town.

One morning Emil and Karin Carlsten and their two small sons Georg and Fred are gunned down in their own home, and later found by a girl next door. The murder sends shock waves across the close-knit community that reluctantly accepted newcomers from Stockholm but did not share their strong environmental views.
The family created an idyllic life on the outskirts of Torsby, lovingly restored the old white two-storey house, surrounded by meadow and beautiful trees, and ran an eco-friendly smallholding. No witnesses to the massacre and no obvious motives make this investigation extremely difficult but initial inquiries point at Jan Ceder whom the Carlstens reported for illegal hunting. The suspect is arrested, questioned and then released from custody as per the prosecutor’s controversial advice. But within hours of freedom, he’s also shot, apparently by the same gunman.
There are no clues other than the shocking amount of blood and some small bloody footsteps that provide no help at all, until it becomes apparent that those footsteps belong to ten-year-old Nicole, a cousin of the boys, who must have seen the massacre. She has disappeared without trace.
The search for the traumatised missing girl mobilises the community. While the police battle against the clock, the killer also chases Nicole to finish what he had started, and he will do anything to eliminate any possibility of being recognised. When Nicole is found in an infamous bear cave deep in the forest, withdrawn into herself and not speaking, Sebastian Bergman is desperate to reach her.
The Silent Girl focuses on the psychologist and leading criminal profiler Sebastian Bergman, promiscuous, narcistic and a natural liar and manipulator when it comes to personal issues, yet an intuitive and talented expert in his field. He’s hiding feelings of personal inadequacy and the fact that he’s investigator Vanya Lithner’s father, and he’s unable to cope with the loss of his wife and younger daughter in the 2004 tsunami. Protecting mute Nicole brings those feelings to the surface and threatens to break his professional integrity.
Bergman is a complex and unforgettable character, subtly yet strongly drawn. His behaviour affects everybody within the national police homicide unit based in Stockholm, also known as Riksmord. As the team is called to investigate the murder of an entire family away from the capital, it also encounters local politics. The newly promoted detective, efficient Erik in charge of the Violent Crimes Unit with the Värmland police, is married to Pia, chief of the council.
The intricate relationships within the Riksmord team are brilliantly portrayed as the authors give attention to each person. They are all pretty good in keeping boundaries between private and professional lives as far as possible; however, working so intensely and closely together brings many challenges. The undertones of rivalry between investigators Billy Rosen and Vanja are always present. Chief Inspector Torkel Höglund keeps a tight grip on the investigation. He still relies on the sharp mind and advice of the forensics expert Ursula Andersson whose absence is felt by all, as she is recovering after losing her eye, following events in a previous novel, The Man Who Wasn’t There.
Michael Hjorth and Hans Rosenfeldt write with verve and passion, and their background in screenwriting makes the novel visual and powerful. The authors don’t shy from emotions, mostly guilt and loss, feelings that help to understand the characters, and they move the plot at the right pace which most of the time is at neck-breaking speed. The Silent Girl is an excellent read.