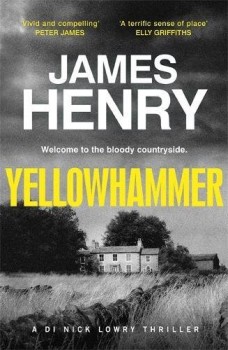 DI Nick Lowry faces a unique problem when two bodies are found within minutes on an Essex farm. One has clearly been murdered. The other appears to be a suicide. As he probes deeper a strange and horrifying tale appears.

DI Nick Lowry and his team return in a taut and atmospheric thriller which turns the ancient villages, marshes and mudflats of east Essex into a suitably dark setting for what is a horribly noir tale. Lowry is faced with a unique problem when two bodies are found within minutes on a farm on the outskirts of Colchester. One has clearly been murdered. The other appears to be a suicide using an antique shotgun.

Is there a connection between the deaths of a well-known TV historian and his accountant? The county force’s assistant chief constable, a college friend of the dead historian, wants answers. So does Lowry’s unsympathetic, stressed and old-fashioned superior, Chief Superintendent Sparks.

As the late summer of 1983 turns into a minor heatwave, both the heat and the investigation intensify. Lowry and his team, DC Daniel Kenton and PC Jane Gabriel, find themselves under increasing pressure as they interrogate enigmatic neighbours, dodgy antique dealers, jilted lovers and wronged relatives.

Eventually they begin to unpick a web of rural rituals, dodgy dealing and fragmented families to uncover not just one murder but two as the story races toward an unexpected and truly horrifying denouement.

As with his debut, James Henry’s backgrounding is superb. The villages, farms, backstreet pubs, marshes and beaches of east Essex come alive. So too does the ever-present problem of maintaining an always delicate balance between the area’s civilian population and Colchester’s large army garrison.

The narrative evokes a strong sense of time and place as well as throwing into stark relief changing policing methods, represented on one side by the modernising ACC Merrydown and the other by the traditional Superintendent Sparks. Merrydown, a then rare woman in such a senior position, is keen to push her niece Jane Gabriel towards a career as a detective. Jane, a former model, is not so sure and still struggles to overcome the very real handicap of her looks in what is an unreconstructed male-dominated society.

Kenton is among the first of a new breed of policemen. A graduate entrant, fast-tracked to his present job, his boxing and athletic ability, comfortable background and foppish appearance make him stand out like a sore thumb. And his focus on beginning a relationship with Gabriel proves a distraction from his duties.

Somehow Lowry, a careful, solid and smart copper, must put aside his own marital problems, attempts to give smoking and the police boxing team, to weld them into a detective unit. With no computers, digital communications or CCTV, old-fashioned careful detective work, footslogging, questions, trying to piece together the disparate bits of a puzzle while ignoring dead ends or side issues are the only way to success.

Credible characters and different perspectives tie together events and lead to a neat, if shocking, conclusion to what is a compelling and gripping tale. Even Henry’s sidebar stories – the long connection between the East End’s gangsters and the area’s plethora of antique dealers, some little more than fences, and the rush to con elderly inhabitants out of their listed 16th and 17th century homes to satisfy the emerging City market for period properties and the country life – only add authenticity to what is a clever, if dark, version of the traditional procedural.