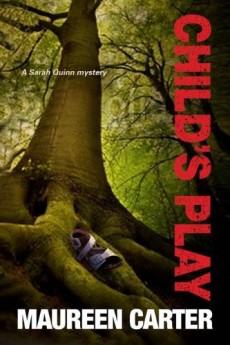 DI Sarah Quinn is faced with an unhelpful mother and an interfering TV reporter as she investigates the kidnap of a Birmingham schoolgirl.

Maureen Carter is one of those writers who deserves to be much better known. Her police procedurals are punchy and no-nonsense, much like their female lead characters. And the books are set in Birmingham, which isn't what you'd call a regular setting in crime novels – we get to see all sides of the city, from swanky wine bars down to seedy pubs and sink estates.

I should declare at the start that I've loved every one of Carter's DS Bev Morriss series featuring a hair-trigger mouth cop who could start a row in an empty room. Child's Play is the fourth outing for the ice queen DI Sarah Quinn and the bane of her life, TV reporter Caroline King. They have enough past history to make the Domesday Book look like a pamphlet.

This time out, they lock horns over the disappearance of 16-year-old schoolgirl Caitlin Reynolds. Her sullen mother Nicola's refusal to co-operate with the police makes no sense to Sarah and her team. Someone wants Caroline to investigate, though. And what's the link with the murder of a schoolgirl in a Leicestershire wood 50 years ago?

Child's Play is crisp and spare, and doesn't hang around. The setting oozes grimy authenticity. Sarah and her DC sidekick Dave Harries spar regularly, but both acknowledge the attraction between them – which fortunately doesn't overwhelm the book. Carter plots competently, although the book does seem a tad short on show and high on tell for once. There's enough tension, though, to keep the reader on-board as Sarah and Caroline come up holding different parts of the jigsaw. And hey, maybe the tension between them is receding by about a millimetre!

Carter is always strong on character cameos, particularly among Sarah's grumpy team, which makes it all the more surprising that Sarah and Caroline don't quite cut it for me. But then they've got stiff competition in the form of Bev Morriss from the other series, who is so real you're convinced you know her from down the pub. Don't get me wrong, I enjoyed Child's Play and am always glad to read Carter's sparky dialogue. And I'm getting to care for those mis-matched lead characters just a little more!