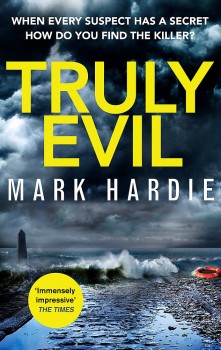 A body, apparently of a young girl, is washed up on the beach near a local landmark. Initial examination, which uncovers the fact it is that of a man, suggests this may not be a straightforward case, especially when identification proves difficult.

When identity is finally established, the list of suspects begins to grow – a young woman who knows more than she will say; the boy’s estranged father, a local gangster/businessman, who has been trying to find the victim for months; a sex shop owner who once had a promising political career. Only thing is clear – no one is prepared to tell the whole truth.

In what appears a totally separate thread, the reader is made privy to transcripts of talking therapy sessions between a former mental patient without a memory, but a dread of his past, and his psychiatrist.

As the story opens up, it becomes apparent this may be connected to a similar murder in almost the same location decades before. Coincidence, or history repeating itself? As cops Pearson and Russell search for the answer, they find themselves drawn into a government-sponsored cover-up going back 50 years.

Mix all this with armed robbery, broken and estranged families, a spectacular suicide which Pearson fails to prevent, interference from senior officers and security agencies and a constant background of seediness and sordid sex and it is little wonder DS Frank Pearson and DC Cat Russell are struggling. But it hardly explains why they fail to properly investigate the final hours of the transgender victim – and even fail to ask where the victim was living!

Mark Hardie’s second look at the disjointed lives of his protagonists in the Essex Major Investigation Team makes even his debut Burned and Broken with its corrupt detectives and management-speak PC senior officers look positively simple!

As both a crime story and a procedural this book is rather frustrating with Hardie appearing more interested in a 50-year-old establishment conspiracy plot than in the present-day murder the mismatched pair are supposed to be wrapping up quickly and quietly to draw attention away from the murder of corrupt cop Sean Carragher.

As a result, the narrative is nebulous, full of ambiguity and possibility – and it can be difficult to keep a handle on at times. But this, with its superb background of a dismal, and dingy Southend in the winter winds and rains, only adds to the uncertainty and realism, leading to a completely unexpected final twist.

Despite renewed exposure, it’s still difficult to connect with Pearson and Russell, both damaged characters in their own ways, rubbing along together often abrasively, but it seems to be a conscious choice by Hardie to write his main characters as such rather than making them more obviously human and likeable.

Stick with them. Test your brains against the twists and turns of the parallel plots. It may be a tough, at times rather bumpy journey, but if you can see it through to the end, it’s well worth it.