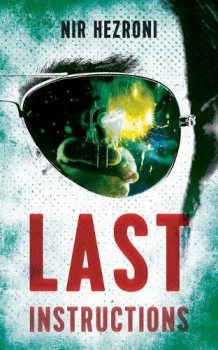 Rogue agent 10483 emerges from a nine-year coma to finalise his plans for revenge against The Organisation, plans which include setting off a nuclear device.

This book continues the story begun in Three Envelopes, in which a covert Israeli unit known only as The Organisation (TO) arranged for the elimination of 12 Iranian scientists, three murders being assigned to Agent 10483. 10483 completed his task, but with horrifying collateral damage. It emerged that Grandpa, head of TO, had recruited 10483 and arranged for psychological conditioning by a contractor, Camit, to induce precisely this result.

Although his conditioning induces him to attempt suicide by throwing himself under a bus, 10483 narrowly survives and in 2016 awakes after nine years in a coma ready to complete his plan for revenge on TO. Part of the plan involves the unearthing of an old Russian nuclear device and setting it off in the US. In addition, he sets up a series of bombs in Israel aimed to kill both civilians and operatives of TO.

The action moves back and forth in time within 2016, keeping the reader on their toes. While the primary focus is 10483 and his detailed planning, agents from TO are close on his tail. Camit re-appears on the scene, now regretting her part in past operations and using her skills to redress some of the evil she has done. There is also another un-named group with a seeming commercial interest in recovery of the nuclear device, with operatives reminiscent of Jules and Vincent in Pulp Fiction.

10483 is a consummate actor and implements his plans with efficiency and precision, killing without compunction where necessary. The cold chill of his intentions makes a macabre contrast with his domestic preoccupations as he moves towards his goal. He imprisons TO staff in a cage and feeds them cat kibble, the swine. His foes are however not much more sympathetic, leaving the reader with at least a sneaking feeling of sympathy for 10483.

As with its predecessor, Last Instructions provides excellent entertainment. The antagonists fight to achieve their objectives and cruel killers eliminate anyone standing in their way, with the prospect of explosions which, if set off as planned, will kill thousands of people. The plot moves fast, zipping around in time and slowly building up to an exciting finale.

It has to be said that on close examination the plot contains a few puzzling aspects. What possible advantage could TO hope to gain by using such a warped instrument as 10483? Why does 10483 tell TO of his plans for revenge, when they would be so much easier to execute if they thought he was dead?  Can you really fit 18kg of explosive between the inner and outer cylinders of Tel Aviv trashcans? But who cares, this is great fun, with lots of technical detail demonstrating that a single man can blow up the world providing he plans well. I’m convinced!