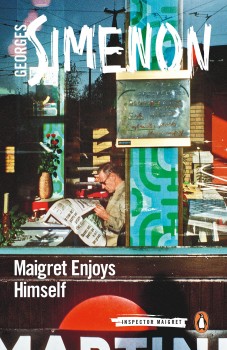 Maigret, recuperating from a bout of bronchitis, has been given instructions by his doctor to rest and take a holiday. When an intriguing crime is committed, however, he finds it impossible not to become involved, even unofficially.

Maigret is taking time off work following a bout of bronchitis and has been given strict instructions to forget all about police business. However, when a woman is murdered in very puzzling circumstances he cannot help but become interested.

It had been Maigret's intention to spend time with his brother-in-law's family, as he and Madame Maigret frequently do. However, It happens that they are going on holiday to Italy. After considering a number of other possibilities, Maigret and his wife decide to take their holiday in Paris itself.

There is a rather amusing description of Maigret, having eaten his breakfast, gazing vaguely out of the window at the street below and being told by his wife to move so that she can sweep around him – words he remembers his mother using when he was a child. He has rarely had the opportunity – or even the desire – to do absolutely nothing and is finding it strange, though not unpleasant.

He and his wife decide to take walks in those parts of the city with which they are not very familiar, though Madame Maigret, who tends to suffer from sore feet, has to shed her high heels in order to do so. This quickly becomes a routine, as does eating out in restaurants rather than at home, causing Madame Maigret to complain that she will soon be forgetting how to cook. It is a routine which, however, is soon interrupted when Maigret reads about a crime and becomes interested in spite of himself.

He learns that the naked body of a woman has been found stuffed into a cupboard in the house of a well-respected doctor who ran a very fashionable and profitable practice on Boulevard Haussmann. It turns out that the name of the dead woman was Eveline Jave and that she lived there with her husband, Philippe and their three-year-old daughter. The crime it taken up by the newspapers and, whilst he cannot take any active part in the investigation – he has informed the office that he is in Les Sables d'Olonne – Maigret reads avidly about it and begin to have theories.

In fact, the knowledge that the newspapers seem to be able to acquire is more than one might normally expect to see. The way in which the newspapers cover the case in considerable detail day after day is clearly a contrivance and one which it is difficult for the reader to accept.

Another source of difficulty for the reader lies in the circumstances of the crime, particularly in the theories as to timing. There are so many varying accounts of journeys taken by Jave and his wife, including one that involves flying from the French coast to London in order to catch a connecting flight to Paris! It becomes almost impossible, without a considerable amount of back-tracking, to remember exactly who is supposed to be where and when, with the result that the action becomes rather mechanical and uninteresting.

In the end, of course, Maigret does manage to find the killer and to establish how the crime was carried out, but it is less than convincing. Furthermore, when the truth is known we have to question whether the motivation for the murder was sufficiently strong.

If, however, the plot fails to grip the reader there is some compensation in the form of a greater concentration on the relationship between Maigret and his wife. There is no grand display of affection but it becomes clear that this is a marriage in which, although it may be low-key, there is mutual support and love. All too often we find Maigret away from home, frequently missing meals, and we can only sympathise with his wife. In this novel she comes much more into her own and we see how her husband loves and appreciates her – feelings that are clearly reciprocated.