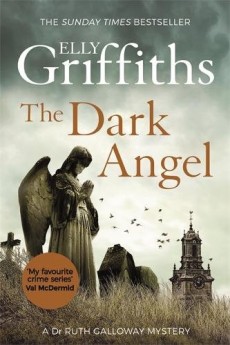 University lecturer and forensic archaeologist Ruth Galloway is asked to lend her expertise to the discovery of bones in an Italian hilltop village. But the past and present collide when there’s a present-day murder.

The Dark Angel, the latest in Elly Griffiths’ highly enjoyable series featuring forensic archaeologist Ruth Galloway, has the feel of a rather chaotic charabanc outing where someone always over-indulges on the food and drink, and a small child is bound to throw up before you get to the seaside.

Ruth is a university lecturer who specialises in bones. Usually her expertise is needed close to home in Norfolk. But this time Dr Angelo Morelli, an Italian archaeologist, has asked for her advice after the discovery of bones in Castello degli Angeli, a hilltop village near Rome.

So off Ruth trogs with daughter Kate and best friend Shona and her sprog in tow for what she hopes will be a civilised working holiday. Except, there’s a present day murder, and the rest of the Norfolk gang show up.

It’s crime fiction – of course the lead character will have an unconventional love life! Ruth is resolutely single and continues to have conflicted feelings about DCI Harry Nelson, who is Kate’s’s father. Nelson is married to Michelle and has two grown-up daughters. And Michelle, who had her own fling with Nelson’s police colleague Tim, is pregnant again.

If you prefer your reading matter without an overload of kids, you may wish to pass on The Dark Angel, where grizzling children are never far from the surface! And it’s entirely too neat the way all the usual suspects from Norfolk turn up in Italy.

Ironically, the two weaker books in a strong series have been the ones where the characters have been taken out of Norfolk – A Dying Fall, where Ruth and Co travelled to Lancashire, didn’t quite convince me either. One of the attractions of this series is the Norfolk landscape – particularly Ruth’s remote cottage by the salt marshes – and the way Griffiths weaves in the history of the area, rather as Jim Kelly does with his journalist series.

That said, there are some dark glimpses of how past history impacts on life in modern Italian villages. And Griffiths is always strong when it comes to creating a spooky setting – if you favour rural Italy for your hols, you may end up looking over your shoulder a lot as you wander down narrow streets.

Griffiths has a relaxed way with her characterisation, and I always warm to Ruth, who isn’t the sort of clichéd female lead who survives on lettuce leaves and a six-mile run before breakfast. And I have a soft spot for her druid friend Cathbad who, in the wrong hands, could simply have been a figure of fun. Instead, he’s the sort of intuitive friend every free-thinking woman should have at their side!

The Dark Angel is a more than acceptable holiday read, but it feels a bit too much like treading water as Ruth and her entourage go on tour.