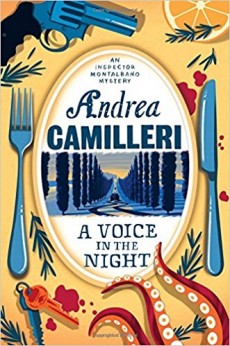 A Voice in the Night

Inspector Montalbano’s birthday starts badly and then gets a whole lot worse when a number of deaths occur on his patch.

Inspector Montalbano’s birthday begins with an incident with an octopus, a phone call from his distant girlfriend and an attack with a monkey wrench by a young man driving a BMW.  And that was all before he got to the office!

A burglary at a supermarket is then the first reported crime of the day and this develops into a very nasty series of deaths, both at the store and elsewhere; a body in an apartment; then one in a sort of greenhouse out in the countryside. As always, nothing is quite what it seems.

The young man with the wrench is the son of an important family, the supermarket has Mafia connections, whilst one of the murders has links with important politicians. Meanwhile, Montalbano is feeling rather old, rapidly approaching retirement age – but nevertheless still enjoying his food, regular lunches at Enzo’s and dinners prepared by his cleaning lady Adeline, who is the one who has to sort out the octopus!

This Montalbano book is a delight to read, the action flowing smoothly, interspersed with Montalbano’s sometimes tortured thinking, and the rather irritating habits of his office colleagues. Fortunately, through regular reading of this series of novels, the reader can become semi-immune to the irritating language of the character called Catarella. Indeed, he appears to be getting better with fewer outbursts of the bizarre expression “poissonally in poisson.” This is certainly an improvement!

A frequent irritation for Montalbano in this story comes from his loyal colleague Fazio who is a bit of a stickler for detail. Fazio seems to irritate him more than Catarella for whom, inexplicably, he seems to have endless patience! Montalbano certainly has less patience than he used to have. This theme of aging percolates right through the book, as does his tetchy long-term relationship with girlfriend Livia.

Despite the minor irritations, each character has so much depth and each conjures a picture which often, but not always, matches the characters in the various television adaptations of the stories. However, the books have a particular quality which makes them stand alone. The writing and the translation work perfectly to transport the reader to a unique place in the Sicilian sunshine.

The early sections of the book are just so clever at describing how a series of domestic disasters can make a person feel completely incompetent. The quick-fire action and reaction is pure slapstick comedy. The author is a master of writing dialogue that thrives on double-meanings and misunderstandings. Similar skill is shown in the discussions and thoughts that Montalbano has about the problems he has to solve – indeed at times, particularly towards the end of the book, the intricacies of his thinking become almost too clever to follow. Despite the lightness of atmosphere in the book the reader really has to concentrate to follow the twists and turns of Montalbano’s thoughts.

Overall it is a joy to follow this series with its familiar characters and aging inspector. The setting of Sicily is perfect with plenty of detail in passing of the local countryside and the food.