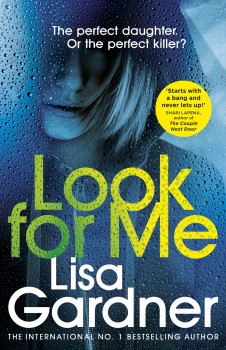 Out of the family of five, four are dead. The hunt is on for the survivor and two blind dogs, but no one knows if the girl is a victim or a murderer.

Boston Sergeant Detective DD Warren loses out on another precious moment with her husband and young son when the call comes through about a home invasion. Juanita Baez, her daughter Lola, her son Manny, and her partner Charlie Boyd have been shot down. Roxanna, Juanita’s older daughter, is missing, along with the family dogs. DD see two likely options; either Roxy has been kidnapped or she is the killer.

Flora Dane was once a victim. Now she is a survivor who teaches other victims how to take back control of their lives. She recognises the amber alert flooding Boston’s media; Roxy is the latest to join her group. But she has not met the girl; only her protégée Sarah has. Logic tells Flora and Sarah that Roxy may be the killer. Instinct says she isn’t.

Soon Flora will be implicating herself in the investigation, getting under DD Warren’s skin. Soon Flora and DD will discover that Roxy’s family has a tragic past. And soon there will be more shootings. Will the two women be able to work together and find Roxy in time?

I am ambivalent about prologues. If they are pertinent and set the scene, they have a place. If they are long-winded, it would be better to call them chapter one. The prologue in this book is certainly long enough to be the first chapter, but it is a hook that is at best confusing and at worst irrelevant. It doesn’t concern the three main characters or the current investigation. So, while it may vaguely set the tone in one respect, I do not feel it has a place in this story.

As always, I ignored the blurb about this book, barely noting the author’s name. So the strange use of points of view led me to believe the protagonist was Flora. I did not realise until quite a long way into the story that this is the ninth book of a series about Detective DD Warren (ten, including a novella). The chapters swing between her, written in the third person closed point of view, and Flora Dane, written in the first person. There are also chapters devoted to a personal narrative project, written in the first person from Roxy’s point of view. As a standalone book it works well enough, but it left me distanced from the protagonist and far closer to Flora.

The plot is predictable and there is no sense of the stakes rising, even though there is a girl on the run and a couple of other shootings. I don’t feel danger rising from the pages, which I should do if one of the early scenes is of a massacred family. The red herrings are too obvious, as are the clues to the murderer’s identity. And there is far too much repetition which bogs the story down, slowing its pace.

That said, there are aspects that I enjoyed. Whilst Flora’s negative introspections may be overcooked, she is an interesting character. She takes the role of PI, but refreshingly, she is upfront and honest with the detectives. She does not keep her findings from them. DD is reasonably developed and convincingly unsure of where the investigation is going early on. I am sure if I had read all the earlier books in the series, I would relate to her more.

The reader learns about Roxy primarily through her personal narrative project, which is just a gimmicky title for backstory, and via her friend, who is somewhere on the spectrum. However, her story is tragic, ugly and sadly believable. Some readers may find it disturbing, though not graphic. The rest of the cast is underdeveloped, which is a missed opportunity, because some of the characters could be fascinating. Others simply seem to be there to increase the list of suspects.

There are moments where description of the milieu is touched on, but I don’t have a particular sense of place. I would like to have felt the desperation in the interior of the foster home more, along with the potentially menacing aspect of the theatre’s warren of rooms. I have no more knowledge or feel for Boston than before I read the book.

Look For Me is a straightforward read, with a good balance of dialogue, introspection and action. However, the backstory and repetitions need paring. At over 450 pages, it is long without necessity. DD Warren is a detective I would be happy to read about again but Look For Me is more a story about a family tragedy and the failings of the foster care system than a police procedural.