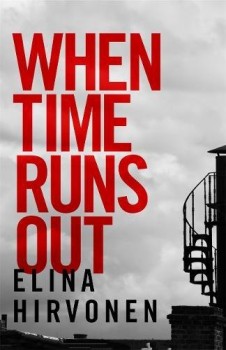 When Time Runs Out

As a young man fires shots from a rooftop in downtown Helsinki, his mother and sister are confronted with a horrifying truth, and the realisation of what has been happening to their loved one.

The premise of Elina Hirvonen’s book is deceptively chillingly simple: the world is on the brink of disaster and something needs to be done urgently. As the story unfolds and is told from three perspectives by members of the same family, the reality of what has been happening over the years culminates in a shocking event.

As a young man fires shots from a rooftop in downtown Helsinki the ripples of his action reach far and wide. Nobody realises he’s in the middle of a global action, with different people linked through online chat forums and ideas. His unsuspecting mother confronts a horrifying scenario she’s powerless to stop. And his sister can only watch from afar, unable to help. To the police, victims and spectators this is a terrorist act that they cannot comprehend. To the fragmented family in the centre of it, this is more of a cry of desperation and anxiety, although still totally unforgivable.

Laura Anttila, a political activist and university lecturer driven by compassion and anger, has spent her entire life fighting the climate catastrophe. She feels a failure as a mother, even though she brought up conscientious children, now adults: Aava and Aslak. They took different routes to deal with injustices of the world. Aava, a doctor living in Mogadishu, is shaken by the death of a young girl who wanted to be a doctor but died of diarrhoea when Aava couldn’t get back in time due to serious security issues.

Aava’s younger brother Aslak was an incredibly happy baby but then turned into a shy loner at school, and someone who disappears. He was diagnosed with severe depression but rejected help and eventually has just existed on the outskirts of the society. The father Eerik seems to stay in the background of the family unease, mentally away from uncomfortable demands and often physically absent as he works all over the world, and he doesn’t feature much in the novel’s plot.

The narration moves between present and past and we can follow the personal experiences, intertwined with thoughts on terrorism and religion, some of them chilling. Both adult siblings try to understand the reality of their environments: Aava in deprived Somalia, Aslak in successful Finland. But they can’t find any answers on how to reconcile differing opinions on the use of violence.

Elina Hirvonen’s novel, translated by Hildi Hawkins, was first published in Finland in 2015, and brings to mind Antti Tuomainen’s The Healer (2013), focusing on the environmental disaster created by people, and the consequences for the human kind. When Time Runs Out doesn’t go that much into a future but deals with similar frightening scenarios. It also poses important questions about taking responsibility and taking action, and how private feelings can make a huge global impact.