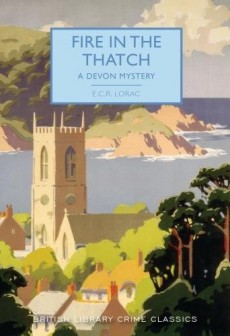 Fire in the Thatch

When a man’s body is found in the burned-out shell of a cottage, it is assumed it is that of ex-navy officer Nicholas Vaughan and that his death was due to an accident. His former CO refuses to believe the verdict and Inspector Macdonald is sent to re-examine the case.

The British Library, which is continuing its policy of re-introducing some of the lesser-known authors from the Golden Age to the modern reading public, has fired out two stories in quick succession by the completely forgotten ECR Lorac, a member of the prestigious Detection Club, and whose work was highly praised by Dorothy L Sayers.

Lorac was the pen name of Edith Caroline Rivett, a prolific writer from the 1930s to the 1950s. Her books have been almost entirely neglected since her death but deserve rediscovery as fine examples of classic British crime fiction in its golden age. The usual introduction by Martin Edwards gives information about the author and a synopsis of what is an absolutely cracking historical police procedural.

Location can be central to the story, giving depth and sometimes even clues to the central questions. Rivett was evacuated to Devon during the second world war, and several of her novels draw on her knowledge of the county.

The book is set shortly before the end of the war, where country ways, reactions to an influx of evacuees, the contrast with London attitudes, and even geography become relevant to the investigation in a clever murder mystery – if only because for much of the story it is not entirely certain there has been a crime! As in most of Rivett’s stories the central characters are introduced early and the background carefully set out – a device that allows her to spread a trail of red herrings by pointing the finger at almost any of them.

Injured ex-navy officer Nicholas Vaughan rents a run-down cottage and land from Colonel St Cyres, once a major landholder, now fallen on reduced times. His application, knowledge and commitment impress the locals, normally slow to welcome newcomers.
When a badly charred body is found in the ruins of his burned-out cottage, it is assumed it is Vaughan and that his death was probably due to his own carelessness. But his former commanding officer refuses to believe the official verdict and brings pressure to bear through the old-boy network for Scotland Yard to re-examine the circumstances surrounding his death.

Chief Inspector Macdonald is sent to Devon and together with a surprisingly competent local Superintendent eager to cooperate, they establish the confusing facts of the case. Macdonald, Rivett’s longest running protagonist, is his usual taciturn Scottish self. His character is never fleshed out and while supremely efficient he is never a character a reader can warm to – more your ideal, near-robotic detective, careful, methodical, sifting facts, red herrings and personalities until he can finally tease out the truth.

This is a confident, well-written story in which small details are investigated to great effect and the contrast between the local inhabitants and an influx of brash, exploitative Londoners, convinced money can buy anything, are played up to the full.

There’s no great mystery to the plot – a careful observer will find the killer and the motive quite early on. But it the wealth of detail and standout characters such as the young Cockney evacuee Alf, intelligent beyond his years, with an overwhelming interest in cars and a keenness to help and Anne St Cyres, the Colonel’s daughter, a quiet but eloquent witness, make this such a good read.

Fire in the Thatch is a little wordy in places, but overall it’s as good an example of Golden Age detective fiction as you are likely to find.