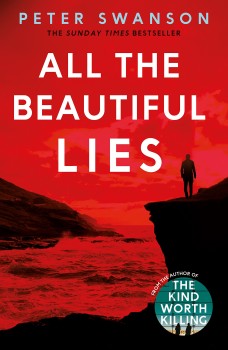 All the Beautiful Lies

Harry Ackerson, on the verge of graduation, is called home to Maine after the death of his father in a mystery fall. As he learns more about his father’s life – and the various women involved – he becomes convinced the death was no accident.

Peter Swanson has produced a sly and clever guessing game of a novel likely to appeal to fans of Patricia Highsmith. But in some ways, it’s just too American!

Character-driven and strong on psychology, it features almost every mental health issue in a tale of delusion, deceit, lust, revenge, obsession and murder which could never happen anywhere except in a nation devoted to self-interest to the exception of moral balance!

Swanson’s fourth psychological thriller, a solid, duplicitous and twisted tale of suspense, featuring lust, greed, and dishonesty, is a detailed and often gripping exploration of delusion and deceit.

Harry Ackerson, about to graduate from college, is called back to the family home by news of his father’s death in a fall on a clifftop walk he has used every day for years. He returns to help his stepmother Alice pick up of the pieces of their lives and also to uncover what happened.

Harry has always harboured a teenage guilt over his sexual attraction to Alice, a woman much younger than his father, and faces a huge dilemma, when under the guise of not wishing to be left alone, she begins to actively encourage his interest. At the same time he meets a mysterious young woman claiming to be new to the area, but soon suspects she may not be the complete stranger she professes. Mesmerised by the two women, Harry finds that the closer he gets to them, the more isolated he feels, disoriented by a growing fear that both are hiding dangerous, possibly deadly, secrets – and that neither is telling him the truth.

As new evidence sees the police change an initial assumption of accident to one of possible murder, the primary issue for Harry is that he will not be satisfied until he discovers what really happened. Learning about his father after his death proves a traumatic experience as he becomes entangled in the lives and the lies of those who had filled a place in the life of the apparently respected, but quiet, antique bookseller’s life.

This intense, mind-binding thriller is told from multiple perspectives over a timespan of more than 20 years. In the present, Harry is caught up in the investigation. In the past, we get snapshots in time from the perspective of every major player in the story which should enable the reader to be able to piece together a series of seemingly discordant scenes to find the killer.

The pieces gradually fall together as several more killings follow, with another surprise death neatly closing the story – and the irony of the title of this dark tale becomes apparent.

So many lies, none of them especially beautiful. So many unreliable or unlikeable narrators for a tale of moral ambiguity and a tense and often ugly search for truth. Harry himself is far too bland to dislike, but it is impossible to view any of the others without suspicion.

The story is undoubtedly well written and clever, but whether it will appeal to the bulk of British readers will remain to be seen.