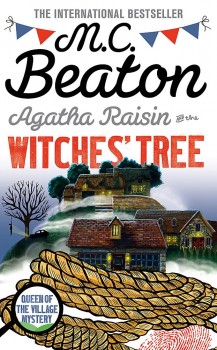 Agatha Raisin and the Witches' Tree

A vicar and his wife driving home from a dinner party find the body of a wealthy spinster hanging from a lightning-blasted ‘Witches Tree’. When more deaths follow, it’s another case for former PR expert-turned detective Agatha Raisin.

The new vicar of Sumpton Harcourt and his wife drive slowly home from a dinner party on a foggy night – and discover the body of an elderly and wealthy spinster hanging from a lightning-blasted tree. Examination reveals she has been murdered – and shortly two more murders follow, one an officious and unpopular policeman. With the local constabulary of course at a loss, former PR expert-turned detective Agatha Raisin puts her reputation – and her life – at risk.

The trouble with coming late to a character who has become a cult figure is that you have high expectations, largely influenced by others’ views. All I can say is that Agatha Raisin, now in her 28th appearance, was a total disappointment and a real letdown.

Before her legion of fans form a lynching party, I’ll put my word in. The story suffers from a completely inane plot, a jumpy and haphazard narrative and an over-reliance on some ancient comic scenarios, all of which have previously been tapped by a long succession of authors.

Agatha herself seems to be falling into a sort of mid-life crisis. As she enters her 50s she has become obsessed with finding romance and marriage, despite two previous failed attempts, eyes every man as a potential Sir Galahad, and dresses at least ten years younger than her age.

The plot in riddled with inconsistencies, continuity and typographical errors. Even basic proof-reading seems to have been ignored as a country’s name changes in the course of 250 pages; there is confusion between the respective roles of retailers Primark and Tesco as early as page three; Agatha is criticised for not having a sat-nav and a few pages later follows the instructions of such a machine; her cats seem to be able to be in either her cottage or staying with her cleaner at the same time.

But these are minor niggles compared to the decision by Agatha’s team not to report the brutal murder of one of the minor characters, a magician, who they find on a ‘prayer rock’, his head beaten in, because they will have to reveal they had employed him to help expose a mysterious coven of witches. Nothing is heard of him again until the rushed final chapter round-up when he is recorded as having disappeared. Nor is there any kind of explanation how the eventually exposed murderer managed to be in two places at once.

Agatha’s love life seems to occupy an overwhelming proportion of this story at the expense of her regular cast of friends, employees and some indifferently portrayed minor characters. This novel requires work by the reader to stay with a formulaic story and meandering plot and blindly accept former PR expert Agatha’s occasional flashes of intuition – which appear to have little rationale behind them. All it does is drag out a comparatively straightforward case.

There is some laboured humour at the expense of the class of largely well-off former civil servants, professionals and businessmen who buy into the ‘Cotswold Dream’ of bucolic squireachy and an incompetent country police force, but this is more than offset by a string of overt sexual innuendos and a unwarranted gang rape story which contributes nothing to the plot.

This story, which has the unmistakeable feeling of being rushed into publication, is one for Agatha Raisin loyalists only. If you pick it up as a standalone, you’ll wonder, as I did, if this latest in the long series of cosy mysteries with an English village setting is a literary exercise in joining the dots and has little place in what should be an essentially light and frothy escapist genre?