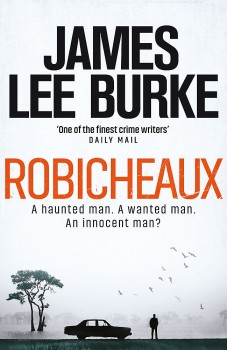 Sheriff’s Detective Dave Robicheaux hits the bottle after his wife Molly is killed in a road crash and wakes from a ‘lost’ night to find his hands cut and bruised and the man who killed her beaten to death.

James Lee Burke is by the length of a levee the finest American crime writer of the past century. His Robicheaux series – this is the 21st – stretches over more than 20 years and the books are still just as gripping, just as melancholy and haunting and just as socially and politically valid as when his hero quit policing the streets of New Orleans for what he thought would be a quieter life as a sheriff’s detective in Iberia Parish.

This amazing series is unsurpassed and has taken readers on a dark trip through the modern history of Louisiana, last outpost of the Confederacy.

It’s written in simple, but evocative and at times hauntingly poetic prose, and chronicles the pride, disgust and bafflement of a very normal man as endemic political corruption, social change, ever-present racism and organised crime has changed the once largely French-Creole speaking state into a poverty stricken, filth-filled backwater studded with pockets of enormous – and often illegally gained – wealth.

It is no criticism to say this is the same book that Burke always writes. One of his great strengths is that his major protagonists reappear just where they left off, their lives adjusting to the brutality of circumstances, but their characters unchanged.

Robicheaux and his closest friend Clete Purcel, a much-decorated former Marine hero, now a private investigator, are both shaped by their past in pre-Vietnam New Orleans and their wartime experiences.

Both are decent men, unable to cope with what their home is becoming. The introverted Robicheaux compares past with present. His earlier experiences, narrated in Burke’s In The Electric Mist With The Confederate Dead, one of the most hauntingly beautiful crime books ever, have left him with fits of deep melancholy. The less self-controlled Purcel exorcises his demons in booze, sex and violence.

Their friends and colleagues, the tough AC/DC ex-meter maid and Robicheaux’s former patrol partner Helen Soileau, now in her third term as the New Iberia sheriff, and Alafair, his beautiful and brilliant adopted daughter, again both have their parts to play in a story which touches as much on social developments as it does on crime.

Most of his characters are not binary black and white, good versus bad, but as in real life people torn by doubt and insecurity and scarred by hard living, hardly part of the rent-a-character cast of many crime novels.

The plot is simple. Robicheaux hits the bottle after his wife Molly is killed in a road crash and wakes from a ‘lost’ night to find his hands cut and bruised and the man who killed her beaten to death. Robicheaux does not know if he is the killer and must plunge into a mire of corruption, political manoeuvring and crime to clear his name.

An interesting social feature, again a must in Burke’s work, is the involvement of a Trumpian populist politician with a dubious past and shrouded future, but the crowning glory as always is his portrayal of Louisiana itself as a character.

He brings the sweaty, swampy background of this hugely colourful environment to a life so real you can almost smell and touch the smallest flower, the rustle of leaves in a torpid backyard, the ever-threatening thunderstorms and the profusion of life in the bayous.

The great master of Southern noir may use much the same plot constructions and character relationships, but he is such a great story weaver and narrator that his descriptive and compelling prose ensure this is another story you can’t put down and which only cements his stellar reputation.