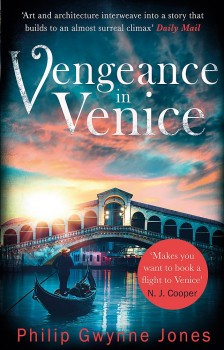 Honorary consul Nathan Sutherland is enjoying a preview at the Venetian Biennale when a critic is decapitated falling from a defective balcony on to glass artwork.

Nathan Sutherland first appeared in The Venetian Game as the British honorary consul in Venice, an unpaid post which enables him to be of service to tourists while making a living from translation. He shares a flat with his cat Gramsci but spends much of his free time with girlfriend Federica and pal Dario.

In his capacity as honorary consul, Nate is invited to the vernissage, a preview of the works on display at the Venetian biennial art exhibition. He is at the British pavilion, featuring glasswork by the artist Paul Considine, when a balcony collapses, causing a renowned critic to lose his head. A postcard in the victim’s pocket showing a classical painting of a beheading looks like coincidence.

Nonetheless, Nate is sufficiently disturbed to ask a few questions by the hostile attitudes of several critics and the artist’s agent Lewis and following rumours that Considine is unstable. The following day at another exhibition both he and Lewis suffer minor wounds from glass arrows, directed by someone unknown, and when Nate finds a card in his pocket with a picture of Saint Sebastian pierced by arrows, it begins to appear that the original fatality was no accident.

Nate undertakes more sleuthing, including a spooky midnight visit to an old plague island in the lagoon where another body has been staged, before he begins to see who is behind recent events. There is a nail-biting finale where Nate has to deploy very limited resources to save both himself and his friend Dario from a painful early death.

For much of the story Nate comes across as a somewhat less than staunch protagonist, being outmanoeuvred by his cat on several occasions, needing encouragement from friends to keep focus, and prone to a rather smug and flashy display of his knowledge of the arts, although he does have an unexpected enthusiasm for certain 1960s prog rock bands.

The crime story is in truth rather fanciful and full of the sort of Machiavellian complexities that no sensible murderer would ever bother with, even one as full of evil menace as this one turns out to be. But the point is really the protagonist’s love story with the city in which the tale is set, every new chapter revealing another perfect vista which even the crush of tourists cannot entirely ruin.

Those who enjoy reading about Venice may therefore find the book particularly appealing, although however good the reality one does get a little tired of someone endlessly banging on about it. The detailed depiction of the specialist coffees to which Nate treats himself every 15 minutes gets even more wearing, especially since as a long-term resident he manages to avoid the extortionate prices which visitors get soaked for.